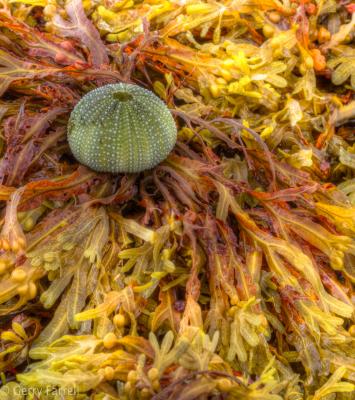 There's an interesting symmetry to Gerry Farrell's life. In his first career, as x-ray technician, he spent his days studying images and looking at the human body in a different way than most of us do. His work inspired a new hobby, photography, which allowed him to capture images of other areas of life, often with a new perspective. And not surprisingly, he preferred to shoot in black and white.

Gerry's photography passion continued as he transitioned from black and white to colour, and, fairly recently, from film to digital equipment. He also changed careers, graduating from Memorial University with a degree in medicine in 1974. After placements in Grand Bank, N.L. (not far from his hometown of Marystown) and Pictou, N.S., he's currently a palliative care physician in New Glasgow, N.S.

As a photographer, Gerry says, "I am early morning person and like to take advantage of the 'golden hour' of sunlight, either at sunrise or sunset." The tools he relies on to capture the best images include his Canon 5D Mark 3. "I use a variety of lenses, but my most frequently used is a Canon 24-105 f4 series. I enjoy wide angle shots and use a 17-40 lens for same," he says.

Something more significant than good equipment that Gerry credits for his quality of photography was a special experience he had a few years ago.

"About five years ago, I spent a week with world-renowned photographer Freeman Patterson, and his inspiration made me a much improved photographer," he says.

"Waterfalls have been an enduring subject for me, and I have visited many of the ones in Nova Scotia, and just returned from a photography adventure in Iceland, where there are waterfalls around every bend," he says.

He and his wife (also a Newfoundlander, from Brig Bay on the Northern Peninsula) return to the island on a regular basis, where Gerry finds inspiration along the seashore. One of his favourite images was taken during one of those trips home.

"One image of sea urchin shells on the rocks along with seaweed at the Arches on the Northern Peninsula was made in the pouring rain two years ago. I wanted to make an image as a wedding gift for a friend. It included two shells and I titled it 'Nestled,'" says Gerry.

"I always enjoy going to Newfoundland and Labrador, and walking along the seashore and photographing things I find there. Also, the fog in the early morning light creates a wonderful mood and makes one appreciate all the beauty around us."