The Benefits of Texting 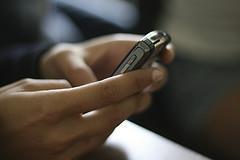 When we associate texting with our health, the topic is usually bad news: texting while walking/driving causes accidents; constant texting causes carpal tunnel syndrome; texting too much damages personal relationships etc. etc. However, as the following studies show, texting has also proven to have distinct health benefits. In fact, mobile phones have found a place in the modern delivery of health care. It's called Mobile Health, or mHealth, which covers any use of laptops, cellphones, tablets etc. in collecting patient data, monitoring patient health and delivering services.

Here are four ways that sending and receiving text messages can improve our health:

An emergency room doctor at Hasbro Children's Hospital in Rhode Island led a study that offered a violence prevention and intervention program via text messages to young female patients who'd experienced peer violence. The teens overwhelmingly agreed to the follow-up service, believing the supportive messages could help them avoid violent situations in the future, and they indicated they would recommend the service to other young girls at risk. The results of the study were released this past March, and the positive outcome has the hospital looking at ways to expand the service to reach out to at-risk male youths and non-English speaking teens.

A University of Connecticut study observed positive results in HIV/AIDS patients who connected with their health care providers via text messages. Earlier this year, The Center for Health, Intervention and Prevention (a division of the university) released the results of a study in which patients who received text message 'intervention' were found to be more likely to stay on track with their drug regimen and have better health than those who just saw their physicians for follow-ups every few months.

Persons at risk for type 2 diabetes could benefit from text message reminders about their health, according to a University of Michigan study. Persons who signed up for and received regular messages about eating healthier, drinking more water, exercising etc. were more likely to lose some extra weight and live a healthier lifestyle, according to the study results released in 2013.

Receiving a simple 'how r u' on their phone from a loved one can be a much needed lift to someone who is isolated or feels alone, according to a University of California Berkley study that began in 2010. The project, led by a clinical psychologist, involved sending mental health participants regular messages asking about their moods, suggesting they think about positive things that happened to them and reminding them to take their medications. When the program ended after a number of weeks, several patients reported missing the regular connection. To someone who's depressed or under stress, a concerned text message is a welcome connection and immediately makes them feel cared for - proving that through texting you really can reach out and touch someone."

Downhome asked our facebook friends, "What's the BEST news you ever received via text message? Here's what some said:

"I got asked to be a godmother for the first time." - Chantal Oake

"I'm coming to get you" - when I was stranded. " - Tracy Perry Stepanuk