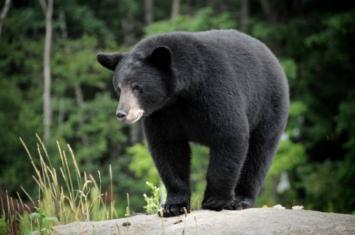 There are two main reasons to visit the Little, Big Bear Safari, located about 90 minutes from Moncton in Acadieville, New Brunswick. One, of course, is to safely view black bears as they roam onto the wilderness site. Another is to meet Richard Goguen, a.k.a. "the bear whisperer."

My husband has a gift with animals, says Vivianne Goguen, who co-owns the attraction with her partner. The couple built an observation tower in 1998 with the intention of inviting the public to safely view and photograph black bears in their natural environment. But one bear had a slightly different plan. During construction, an orphaned cub wandered into the area and, as Vivianne puts it, "adopted" Richard. They aptly named the cub, which Vivianne says followed Richard around like a dog, "Pooch."

After a few years she had babies and we said, "Oh great, she's going to become wild and that's ok but after a few weeks she brought her babies out and literally introduced them to grand-daddy, says Vivianne. She pushed them towards Richard. Now 16 years later, the Goguens believe Pooch has passed on, but three generations of her descendants still visit the site very frequently and maintain the unusual bond with Richard.

Check out this shocking footage taken at the Little, Big Bear Safari. Richard enters the scene at 1:20.

While they do not guarantee sightings, Vivianne says their tour groups have missed out on seeing black bears only twice since opening to the public in 1998. Once visitors are safely inside the 26-foot-high tower, Richard lures the animals to the site with food. We have the same permit as hunters  we have the right to leave little treats, says Vivianne, adding,  "but we shoot with cameras only."

Local biologists have openly criticized the business, saying Richard's close relationship with the bears is extremely risky - not only putting himself in harm's way, but also anyone who may encounter one of these bears in the wild, outside the safety of the Safari. Vivianne maintains they have never had any complaints of that nature and believes the bears prefer Richard only. However, she warns, We don't suggest that people do that in their backyard. Don't try to do this.

To find out about other wild encounters available right here in Atlantic Canada, see the July issue of Downhome.

Editor's Note: Richard's interaction with black bears is extremely risky. Never, ever approach a black bear if you encounter one in the wild. To find out what to do if you do encounter a black bear, click here.