How the Newfoundland accent led an ex-pat to her biological parents. 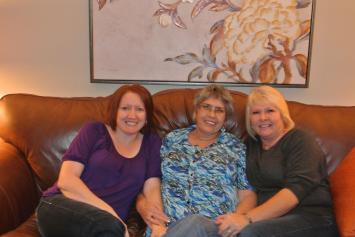 Lisa with her biological mother, Liz, and sister, Loretta.
By Ashley Colombe

A Newfoundlander living in Nova Scotia for the past 28 years, Lisa Braye's ear is still fine-tuned to the sound of the Newfoundland accent. Whenever the 46-year-old hears that unique lilt roll off some stranger's tongue, she says she just can't help but ask, "What part are you from?" But one day last fall, Lisa's favourite conversation starter wound up leaving her completely speechless.

On October 3, while enjoying a night out at a bar in Lower Sackville, Nova Scotia, Lisa overheard that familiar twang from a couple seated nearby her and, as usual, she began chatting them up.

As Lisa predicted, the couple, Shirley and Jeff Taylor, were from downhome.

"They told me they were from St. Anthony and then they asked me (where I was from) and I said, 'well, I was born in St. Anthony actually, but I grew up in Corner Brook because I was adopted out,'" explains Lisa. Curious, Shirley asked Lisa how much she knew about her birth parents - which wasn't a lot. Lisa's adoptive parents, Gae and Rex Braye, knew only that her birth mother's surname was either Grinham or Greenham and that Lisa's name at birth had been Ivy; she knew nothing of her birth father.

After revealing those few pieces of information, along with her date of birth, Lisa says, "their mouths were open and it was just total shock."

"(Shirley) said, 'I would say 100 per cent but I'm not going to because I have to call her - but I'm 90 per cent sure that my best friend is your biological mother," says Lisa, recalling the conversation that took place. The following evening, Shirley phoned Lisa and confirmed that her best friend, Liz Grinham, was indeed Lisa's birth mother, and gave Lisa Liz's phone number.

"Every emotion any person could ever have I had it that whole weekend - happy, excited, nervous, shocked - you name it," says Lisa. Despite the emotional rollercoaster, Lisa quickly picked up the phone to speak to her biological mother for the first time.

"I felt like I had to call her because you hear these stories of adopted kids who hate their parents," says Lisa. "So I called Liz to basically tell her that I didn't hate her for giving me up whatsoever, that I had a loving family and I had a great relationship with them."

That first telephone conversation with Lisa was overwhelming, says Liz, bringing back a flood of emotions from the heartbreak she endured the day after giving birth to her more than four decades ago.

"The nurse brought her in and she told me I had to feed her," begins Liz, and for the first and last time, a 19-year-old Liz held the bottle of milk to her baby girl's mouth. "Then the head nurse came in and told (the nurse) off because she gave me the baby - because I wasn't supposed to see her." After a falling out with her boyfriend, and having been turned away by her own parents, Liz, now 66, says she had previously signed documents that relinquished her parental rights. But Liz says those few precious moments with her infant daughter were enough to change her mind. Unfortunately, she was told, there was no going back.

But as the years rolled on, her baby girl was never far from her mind.

"On her birthday, the 16th of May, I used to go around the floors saying, 'I wonder where she's at, is she alright? If she had a good life and stuff like that - just mumbling to myself," says Liz. "I never talked about her much, because it hurt too much."

Liz later had three more children and in 1999, she and one of her daughters, Loretta, decided to search for the missing piece of their family; they quickly reached a dead end, though, told that nothing could be done until "Ivy" (Lisa) came looking for them.

Meanwhile in Nova Scotia, Lisa was becoming curious about her roots as well. Around the time she turned 40, Lisa says, she began pressing her adoptive mother, Gae, for more information.

"It just seemed like I was hurting her, so I said, 'no, I'm not going to do nothing till she's passed away and if it's my loss than it's my loss."

In 2011, Gae passed away at 79 years of age. Lisa was planning to resume her search for her biological parents when she stumbled upon the Taylors last fall.

With Lisa's blessing, within a few weeks of finding each other Liz and Loretta were flying to Nova Scotia. The Taylors hosted the long-awaited reunion at their home.

"(Liz) was sitting at the kitchen table there and she didn't know what to do, like I could tell she didn't know whether to stay seated or stand or give me a hug or whatever," says Lisa. "She just looked at me, and I said, 'well would you like a hug dear?' And she come over and grabbed a hold of me, started bawling her eyes out and just said, 'Oh, I got my baby back in my arms again.'"

"We cried and we laughed and we did it all," says Liz. "She's still my baby to me."
When word got out about the twist of fate that led to Lisa's reunion with her mother, a flurry of media attention followed, with news stories popping up in both provinces. One of those stories reached the home of Wilson Osmond of Triton, Newfoundland - Lisa's biological father.

The year that Lisa was born, Wilson says he moved to the mainland, where he settled down and started a family, including two daughters: Lori and Lisa (yes, another Lisa). He returned home to live in 2001.

Lisa and Wilson have since connected by telephone, and they're planning their own reunion this summer.

"I feel great about it, yes I really do," says Wilson, 68, adding he thought bout Lisa often throughout the years.

Since running into the Taylors last fall, Lisa's family has expanded considerably. In addition to finding her biological parents, she's gained four sisters and a brother - plus nieces and nephews.

"I'm going to have to start working two other jobs just to send Christmas presents," says Lisa, laughing - but it will be more than worth it.

"It's filled a void that's always been with me, and I'm sure every adopted child has that void," she says.

It's going to be a whirlwind summer vacation this year for Lisa, who's planned visits in both St. Anthony and Triton - but her first stop will be Corner Brook, to pick up her adoptive father, Rex, who plans to accompany her.

Rex says he plans to give both Liz and Wilson a hug when he meets them; after all, without them he never could have been Lisa's father.

"We loved youngsters," says Rex who, together with his late wife, had a hand in raising about 85 foster children who passed through his home. He believes if his wife were alive today, she would be pleased to see her daughter reunited with her biological family. "She would think it was wonderful," says Rex, "because that's the type of person she was."
MORE ARTICLES
load more