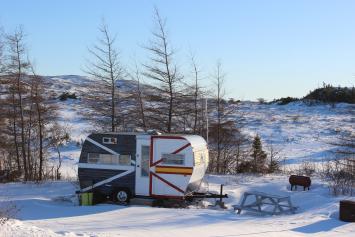 Norman Purchase photo
Whether you're spending the weekend boating, camping or partying at the cabin, here are some tongue-in-cheek, but surprisingly practical, things to take or do to make the most of this May Two-Four. (In order of no importance.)

1. Pack several changes of clothes: rubber clothes, wool clothes, flannel clothes, summer clothes. Be like the Scouts, prepared for anything.

2. At least 5 tarps - one to cover the cold, wet ground; one to go over the tent; one for the cooking area; and two more to block the wind.

3. Deck of cards, to keep the youngsters from killing each other 'cause it's too miserable to play outside.

4. Sunblock. Many May campers have been caught off guard by a sudden sunny break and come home looking like a lobster.

5. Lifejacket, seriously. And wear it. A seat cushion won't save you from drowning.

6. Cell phone, preferably a smartphone so you can tell your whole social network if you get lost, or that you're in the woods and forgot toilet paper #bummer.

7. Guitars, harmonicas, ugly sticks - if you can't play them, you can use them as noisemakers to keep the bears away.

8. Garbage bags to put your sleeping bag in - to keep it dry at night.

9. Snowsuit to sit around the fire at night.

10. Newspapers - they make great fire starters and, if you're stuck, toilet paper.

11. A shovel - in case it snows, and to clear a spot for your camper/tent.

12. Good quality fly oil to douse yourself in.

13. Coat hanger, to use as makeshift rabbit-ears antenna, a fire-proof handle for the camp kettle, a marshmallow roaster, or a slim hope of unlocking your car to get the keys inside.

14. Disinfectant wipes to wash off every surface of the cabin after you find out what rodents have been wintering there.

15. A hat that will keep your head warm and dry, and make you presentable for the trip back to civilization.

16. A bucket to carry water, to sit on around the fire, to hold the fish you catch, or to pee in if you're that afraid to leave the tent at night.

17. An axe to chop wood, cut through ice, or pose with for "outdoorsy" photos for facebook.

18. Homemade bread and tea bags. You can't start the day without a feed of toast and tea!

19. Disposable dishes and cutlery. The weekend's too short to be doing housework.

20. Dry wood for the campfire or cabin stove - 'cause you won't find a dry stick to burn in the woods in May.

21. Snowmobiler locater beacon - so rescuers can find you when the unforecasted overnight snowfall crushes you in your tent.

22. A can opener. There's nothing more frustrating than when you break the tab-thingy off the can of sausages, beans, KAM etc. before you get it open.

23. Stick of bologna - walk softly over the marsh but carry a big stick!

25. The best way to survive May 24 in NL? Spend the weekend with friends and family who you can count on for a good time no matter the location or the weather!