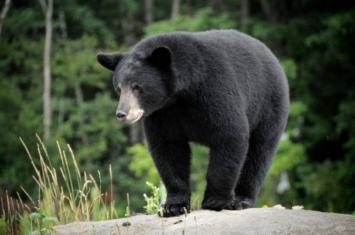 Hikers and campers will soon be headed into the great outdoors in droves for some much needed wilderness therapy after a long, snowy winter. Of course, there's nothing like a wildlife sighting or two - perhaps a moose ambling along the trail or a hungry gray jay sneaking off with some picnic lunch - to feel at one with nature.

But what if you come across a bear?

According to Todd Hollett, a provincial government wildlife technician, if a bear approaches you, "Stay calm and give it space, ensuring that it has an escape route. Back away slowly, while speaking calmly and firmly. Never run or climb a tree, as this may evoke a predatory response. Avoid eye contact so as not to challenge the bear. Always be extremely careful around a bear with cubs. If a bear attacks, DO NOT PLAY DEAD. Fight back, making lots of noise as you do. If you have bear spray, use it."

For more of Todd's bear safety tips, plus all the facts you need to know about the two bear species that roam our province, see "Where The Bears Are" in the May 2014 issue of Downhome.

If you see a bear in or around your community, or become aware of a habituated bear, call your nearest Conservation Officer at your local Department of Natural Resources Office.

Canada is home to roughly 60% of the world's polar bears.

Polar bear fur is transparent and pigment-free with a hollow core that scatters and reflects light, similar to snow and ice.

Adult polar bears can stand 3 metres (10 feet) tall when standing on their back legs.

Adult black bears have a calorie intake requirement of about 20,000 calories per day to help build up winter fat reserves.