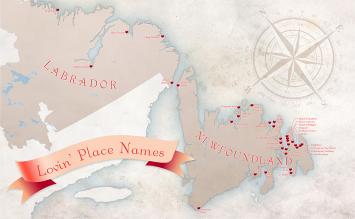 Valentine's Day, a time of love and tenderness and fond thoughts of cherished ones. But imagine it's 500 years ago, and you're a lonely sailor thousands of miles from your homeland, exploring the far reaches of the world. You've got land in your sights and love in your heart. So it would make sense then, that these long-ago, possibly lovesick, folk might have been moved to christen our towns, coves and bays with tender-sounding names - wouldn't it?

Take Cupids, for instance. Upon entering this historic town on the Baccalieu Trail, we imagine the average tourist visiting from upalong might mistakenly assume the place owes its romantic name to that adorable arrow-weilding cherub. After all, the scenery here looks like a fitting home for the ultimate matchmaker. The truth is though, the town shares no connection with Cupid. In fact, in the early 1600s John Guy brought settlers to a place called Cuper's Cove. Over the years the name took on many variations - Cubbit's Cove, Cuperts Cove, Copers, etc. - and finally the present-day name, Cupids.

But Cupids isn't the only romantic sounding spot with a less than loving origin. Read on for more - and check out this neat map of our lovin' place names.

Doting Cove. Based on the name, some lonely fella might stroll into this cove waiting to be tended on hand and foot by the most loving and attentive women in the world.

The truth behind the name: This scenic cove near Musgrave Harbour is actually named after a doater, a Newfoundland term meaning an "old seal"...which is probably not loving and attentive - and definitely not what any lonely fella has on his mind.

Flowers Cove. It sounds like a heavenly place where the land is carpeted in a beautiful wash of colourful flowers each summer.

The truth behind the name: Located near the tip of the Great Northern Peninsula, the beauty of this seaside town really does make it heavenly, and yes, flowers do grow here! But the name, given by Captain Cook in the 1700s, is actually derived from flour - not flowers. However it wasn't Cook's fondness for baked goods that led to the naming of this cove. Rather, back then, "flour" was the name for the white scum of breaking waves. Ahh, the romance of the sea.

St. Bride's. Could this pretty town on the southern Avalon Peninsula really be named after the little known patron saint of the newly wed? Think again.

The truth behind the name: St. Bride's is named after Bridget, one of Ireland's patron saints.

L'Anse Amour. This French name for the picturesque community on the southern Labrador coast translates to "Cove of Love" in English.

The truth behind the name: The above description is the truth - just not the whole truth. According to the website Labrador Coastal Drive, that's a romanticized version of the original, slightly less warm and fuzzy-sounding, name "Anse aux Morts" - or Cove of the Dead - likely named for the many shipwrecks in the area.

Heart's Delight & Heart's Desire. In the case of these neighbouring Avalon Peninsula communities, reality is sweeter than fiction. According to the book Newfoundland and Labrador Place Names by David E. Scott, Heart's Delight was named by "weary travellers who were 'delighted' with the beauty of the place." Of nearby Heart's Desire, Scott goes on to say, "Tradition has it that early travellers, after first seeing Heart's Delight, desired to keep on hiking up the shore to see what they then named Heart's Desire."