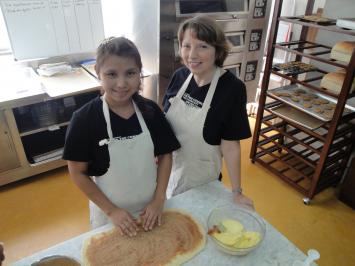 Something as simple as ordering a sandwich can make a difference in the world - at least it can in Yangon, a city in Myanmar, Southeast Asia. There, 40 per cent of residents live in abject poverty, and for those with no skills or education, the future couldn't be more bleak. But Newfoundlander Cavelle Dove is trying to change that, one sandwich at a time.

Born in Grand Falls-Windsor and raised in Stoneville and Stephenville, Cavelle is one of four women behind the Yangon Bakehouse, a bakery and training program that employs disadvantaged women for 10 months in hopes that their new skills will help them find long-term employment and a way out of the cycle of poverty.

"I really believe that by giving people job training and skills you also give them dignity and you give them hope," says Cavelle, who moved to Myanmar with her family last year.

The Yangon Bakehouse hired its first apprentices in November 2012 in preparation for its opening last spring. For many of the women, getting hired at the bakery meant leaving the sex trade and other dangerous or demeaning types of work.

At the bakery, Cavelle and her team teach the ladies everything from proper hygiene practices (not necessarily second nature in a city where running water is a luxury) to sexual health, small business management and how to make bakery delights, starting with the basic sandwich.

"It's a real process. None of these women have any experience; they've never eaten bread before. You talk about the basics - buttering bread!" she exclaims. The tedious training regimen has been an incredible exercise in patience and finding humour in mistakes, says Cavelle. But she says the extra time and energy - not to mention the wasted product - is well worth it. Sales are increasing every month, with profits funnelling back into the training program. And a corporate sponsor recently gave the Yangon Bakehouse a second location free of charge. The menu has expanded beyond sandwiches to include cinnamon rolls, muffins, yogurt and salads, plus they're launching a breakfast line.

The apprentices, too, have evolved. Women who, mere months ago, struggled to survive from day to day now have the confidence and skills to find employment in fields such as catering, domestic help and in the restaurant industry, says Cavelle.

Where she's needed
Cavelle is no stranger to helping the downtrodden. Before moving to Myanmar, she and her family spent a decade in Thailand, working mainly in areas affected by the devastating 2004 Indian Ocean tsunami, which killed 230,000 people in 14 countries. While there, Cavelle and her husband, Peter Dove, founded Imagine Thailand, a non-profit organization that bridges the gap between society's most affluent and society's most disadvantaged, encouraging youth, university students and skilled professionals to create better futures for communities in need. With an excellent team who continue their work on the ground in Thailand, Cavelle and Peter felt their presence was more needed in Myanmar, still reeling from its own natural disaster, Cyclone Nargis, which claimed well over 100,000 lives back in 2008.

But life in Myanmar is no piece of cake.

"The basics of living is challenging," says Cavelle, a mother of three boys, ages nine, seven and four. "The infrastructure is horrendous."

Just 22 per cent of the country's residents have electricity, while only five per cent have Internet access - which is painfully slow where available. The Doves are lucky to have running water, though it is available only sporadically, and Cavelle estimates her family enjoyed electricity only about 60 per cent of the time during the last year. She admits that over time, these inconveniences do wear her down.

"I spent most of July and August in Newfoundland this past summer, and that was the first time in five years that I'd been back to Newfoundland - and it was heaven," she says. "But I have to say, by the end of our time we were all extremely ready to go back. I'm motivated by where you can make the greatest impact, and while I love the lifestyle of Canada and I love being in Newfoundland...I feel like I can have more of an impact where I am."

And she believes her children are better off for it.

"I think it's really important that you model to your kids that life is not just about how much you make or how much you have, it's about being content in your circumstances. I just think that's something to live by, this notion of making a difference where you can with what you have."
MORE ARTICLES
load more