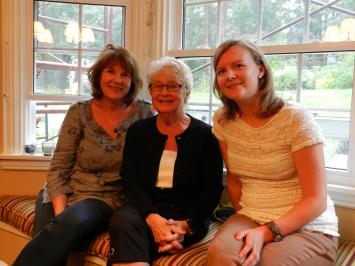 (l to r) Janet Murphy-Goodridge, Doreen Brown, and Felicie Young
A local group is enlisting the help of grandmothers to promote breastfeeding among new moms.

There's no denying it - breastfeeding your newborn babies is not only the most practical method of feeding, but also the healthiest. There are other options, of course, but the science supporting breastfeeding is extensive. Studies have shown that breastfed babies are more resistant to illness and infection early in life than formula-fed babies; develop higher IQs; are less likely to suffer from heart disease, multiple sclerosis, juvenile diabetes and cancer before age 15; and have fewer allergies throughout their lives. Both The Public Health Agency of Canada and The Canadian Paediatric Society, along with the World Health Organization, recommend mothers breastfeed exclusively for the first six months of a child's life.

According to Statistics Canada, approximately 87 per cent of new mothers in Canada breastfeed exclusively. In Newfoundland and Labrador, the average hovers around 68 per cent. This number, though lower than the national average, is actually the highest it's ever been in the province; traditionally, breastfeeding in Newfoundland and Labrador was very rarely practiced. Some estimates suggest nine out of every 10 mothers used formula or some other alternative feeding method.

Felicie Young, a graduate student at Memorial University who researched the role of grandmothers in breastfeeding for her master's thesis, and a mother of two, explains. "I went back through the reports from the Child Welfare Association - they were the ones in charge of children's health back in the '50s and '60s. Looking through some of the old health reports, there are a lot of factors. Women dealing with tuberculosis outbreaks were often told to stop breastfeeding so that their baby wouldn't get TB. Women seemed to get it in their minds that breastfeeding would somehow give their babies TB, and somehow that was linked to the spread," she says.

"Also the financial factor. Because Newfoundland joined Confederation everybody was more prosperous and able to buy formula and Carnation milk. It was seen as a sign of prosperity. Everyone thought science had all the answers, so it had to be better."
Doreen Brown was one of these mothers. She had her first child in 1964, and chose not to breastfeed. However, as she tells it, her choice wasn't necessarily an informed one.
"I went to the hospital, and the doctor gave me pamphlets on lots of things, but mostly they were about the birth. The head nurse came by and asked me 'Breast or bottle?' and I didn't know what she was talking about. My oldest sister was home when she had her baby and had a lot of difficulty with breastfeeding, so she gave it up really fast. So I said 'bottle' and that was it. That was quite common at that time." The nurses instructed her on how to use a bottle and properly disinfect it, but there was no further talk of breastfeeding. The doctor never spoke to her about it at all.

"My mother died when I was 19, so I didn't have any mother support at all. My sisters weren't living in St. John's. I didn't have anybody," Doreen says. "The only person I knew of that breastfed was Mary, my sister-in-law. All my girlfriends were bottle-feeding. But her mother breastfed."

This idea of positive experiences and support is something Janet Murphy-Goodridge tries to promote to new mothers in her role as a provincial breastfeeding consultant and chair of the Baby-Friendly Council of Newfoundland and Labrador, a group that protects, promotes and supports breastfeeding. She, along with Doreen, Felicie and many other mothers of all ages, are working to increase awareness of the valuable role grandmothers play in the breastfeeding process.

"When I was born, in the late '50s - or anyone born in the '60s and '70s in Newfoundland - nobody was breastfeeding then. Our parents didn't breastfeed us," Janet says. "If you look at cultures where breastfeeding is the norm, mothers are supported by their own mothers. They wouldn't need lactation consultants or nurses having to show them. They'd have their own mothers and sisters and aunts who grew up with breastfeeding."
Doreen agrees. "I figured out over the years that breastfeeding was a better thing to do," she says. "And when I started working with Janet and Brighter Futures (a not-for-profit, charitable organization for families in St. John's), I realized how wonderful it was. The big thing is that young women who are breastfeeding need a lot of encouragement. This is where the grandmother comes in."

In her research, Felicie found that grandmothers are incredibly powerful influences on new mothers. "Grandmothers are often such important people - they're the real advice givers of the family," she says. "They influence (the decision) by whether they breastfed or not. If a mother knows she was breastfed, she's much more likely to breastfeed. Grandmothers can also influence with their opinion. If the mom remembers the grandmother saying breastfeeding is dirty or something that shouldn't be done in public, then the mom is not going to breastfeed. That's the thing we can change - helping grandmothers know what they can do to help the nursing moms."

So what can a grandmother do? "For starters, the mother is already so tired. Grandmothers can go in and clean or cook, or if the mother has other children, the grandmother can take the toddlers for walks or play with them, or even the baby and let the mother take a nap," Felicie says.

"If you let the mom feed her baby and focus on breastfeeding, you can do all the nurturing and mothering and helping out," Janet adds. "The positive support builds them up."

Grandmothers can also educate themselves. "We've discovered grandmothers are often ambivalent," Felicie says. "On the one hand, they know from all the recent information that breastfeeding is the best thing to do now, but, at the same time, they don't know how to support their daughters in doing it. They don't have enough information to be committed one way or the other."

The Baby-Friendly Council of Newfoundland and Labrador and Brighter Futures offer a host of resources for new mothers (and grandmothers), and there are numerous breastfeeding support groups throughout the province that both the mother and the grandmother can attend and learn about breastfeeding together.

Really, grandmothers have a job to do - to provide support, to nurture, to continue doing everything a mother does for her own child, and also to simultaneously teach her child how to be a mother while allowing the child to discover her own individual parenting style. And like with all good work, Doreen says there's a wonderful reward waiting for every grandmother. "I remember with John, my first grandchild, just holding him in the rocking chair. I got a wonderful feeling from that. Just having the baby with me, rocking him to sleep, soothing him. It's so beautiful."

To find out more about breastfeeding and what a grandmother can do, visit www.babyfriendlynl.ca.

My first child was born in 1978 and I had very little encouragement to breastfeed. However, one of my friends encouraged me to try it. I breastfed all 3 of my children. They did not have allergies and very few ear infections, etc. From a mother's point of view it was very relaxing and an incredible bonding experience. I am pleased to say that my daughter also breastfed my grandson and he also is also very healthy.