From Cuba to Newfoundland 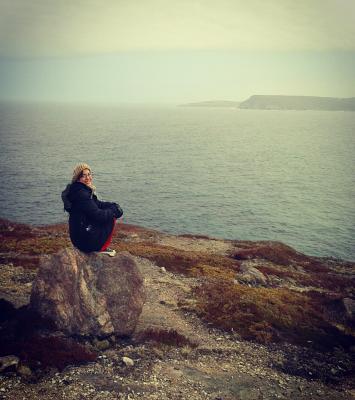 Imagine for a moment that you're officially from nowhere. Everyone's from somewhere, of course - everyone's born in a town or village or city. But say you were born in a foreign country - Cuba, perhaps - and you came to Canada in search of a different life. Say you apply for political asylum. Say it takes a year or two for the application to be considered. In that year, you're neither Cuban nor Canadian. You're officially from nowhere. Tamara Segura was, for a time, from nowhere.
Tamara is an award-winning filmmaker, born and raised in Cuba, who came to Canada as part of a film-school exchange program.
"When I applied for political asylum, I wasn't Cuban anymore, but I wasn't Canadian either," she says. "I was in the middle. You have this weird status where you don't belong to anywhere. It's something you really have to get used to."
Tamara was born in Holguín, Cuba, a communist country with state-controlled media and restrictions on speech and the expression of ideas - a very challenging place for artists. But she did well, even in that limited sphere. She graduated with honours from the Higher Arts Institute, then went on to complete a screenwriting program at the International Film and Television School in San Antonio de los Baños. Tamara began racking up accolades for her short films and documentaries, winning international film prizes in Spain, Costa Rica, Cuba and Mexico.
In 2010, Tamara was chosen to participate in an exchange program between Cuba's International Film and Television School and the Mel Hoppenheim School of Cinema at Concordia University in Montreal. She jumped at the chance. "My country has a communist system where freedom of speech is very limited and access to information is very limited. I'm not a unique case - many young artists are forced to leave the island in order to express themselves and create freely. I'm one of them."
So she came to Canada and settled in Montreal. While there, however, she got in touch with a friend of hers, an actress who had worked in Cuba but now lived in St. John's. Tamara's friend was working on a film here and extended an invitation: come to St. John's and help out. Tamara arrived in July 2012.

Finding home
Newfoundland and Labrador turned out to be a perfect fit. "This is an island and I come from an island. There are so many connections," she says. "They appear very different, but when you go deeper, you can see the similarities in the way people are. It feels very familiar, very welcoming. People are much more down to earth. In the Caribbean, we are all used to interacting and talking to each other. I feel that here. To me, that's priceless. In Cuba you don't get a chance to experiment. But when I got here there were so many things going on, so many possibilities and opportunities. I really enjoy that. It gave me a chance to discover myself and explore." She applied for political asylum when she arrived.
Tamara began working on a new screenplay, "Before the War," based, in part, on her own childhood experiences. "My father went to war when I was a child. After (he came back), I couldn't have a normal relationship with him. It isn't autobiographical, but the inspiration came from that."
But something else also inspired her to write "Before the War": Newfoundland and Labrador itself. "It could be set anywhere, but it was inspired by Newfoundland. Newfoundland is so beautiful. Every time I go out I discover a new place and say to myself, 'This is my new favourite place. I really love going to Middle Cove - one time, when I was learning to write, I went there and saw a little girl watching the sea. She was like a model. There were more children running around and playing, but she was just staring at the sea. It was so expressive. That image appears in my film, and it's something I do all the time now, just look out at the sea."
Because Tamara had lived in St. John's for a year, she was eligible to apply for the 2013 RBC Michelle Jackson Emerging Filmmaker Award, a part of the St. John's International Women's Film Festival, which took place last month. Curiously, the deadline for applications was July 2013, which happened to be the one-year anniversary of her arrival in St. John's. Maybe it was fate, or maybe it was a product of all that inspiration, but, in any case, "Before the War" won. Tamara received $10,000 in cash and services she'll use to bring her winning script to the big screen.
Her victory, however, is slightly bittersweet. Though Tamara told her parents when she was informed she had won, it's difficult to regularly contact them and the rest of her family in Cuba. When the film is complete, she'll find a way to show her family, but there is very little chance the film will ever be shown to the Cuban public. "I'd love to show (the film) in Cuba," she says. "It's my background, those are my roots. And that story, even though it's set here, its roots are in Cuba, so I'd really like to share that with them. I think it's very necessary that young artists who are no longer living in Cuba start to go there and share their visions and what they have learned from being outside. It's not a matter of ego or look what I did, it's a matter of sharing another vision of the world and letting people know it's possible to live different things."
And there's one more thing she's found in Newfoundland and Labrador: a different type of family. "When I'm directing (a film) I really need to connect with my team and make them see all the images that are in my head. To me, that's the most beautiful thing. It's very important to connect with each person on the team and make them understand what the film is about. I'm very passionate about that because I really like to connect with people. I'm a very collaborative person. It makes me feel stronger."
Ultimately, home is where you make it. "The sounds of the sea, the sounds of the city (remind me of Cuba.) St. John's is not a big city, so I can walk around at night and close my eyes and pretend I'm in Cuba. Other than the temperature," she says, laughing.
Tamara is no longer officially from nowhere. Now, she's a Newfoundlander.

I have only visited Cuba once but immediately the 1st thing I felt for the wonderful Cuban people is that they are 'island people'.