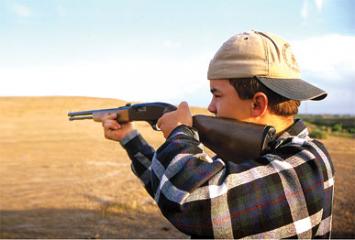 Hunting season has begun in Newfoundland and Labrador. Barry Fordham, public relations officer with the Newfoundland and Labrador Federation of Hunters and Anglers and an avid hunter himself, will join the hundreds of hunters setting off into the woods to - if everything goes as planned - harvest a moose or a rabbit or some other type of wild game. His father taught him to hunt, and now Barry is teaching his son, passing down during their father-son trips years of hard-earned hunting experience and knowledge, and even a little advice on what it means to be a young kid journeying on into adulthood. "You learn something new every day, but it seems that when you go out in the country you learn a couple of new things every day," he says.

Hunting, to Barry and many avid hunters around the world, is not simply the act of finding an animal to kill and eat; it's a learning experience, time to bond, time away from the rush of modern life, a way to understand both the majesty and cruelty of the natural world and our place within it. But the Federation of Hunters and Anglers in this province has, in recent years, seen a decline in the number of hunters taking to the wilderness, and an increase in the average age of those hunters. They see this as a problem: fewer hunters means fewer animals are being harvested, which can lead to population boom. An uncontrolled animal population can lead to increased incidence of disease within the population, destruction of natural habitats and even rising numbers of wild animals encroaching on human territory in search of food. More moose on the road, say. Or more bears in your backyard. The Federation think they know why, and the problem they identify is specific to Newfoundland and Labrador.

The minimum hunting age in Canada is 12 years old for small game (hares, grouse, porcupine etc.) and 14 for big game (moose, bear, caribou), with the exception of two provinces - British Columbia, where the ages are 10 and 12, respectively; and Newfoundland and Labrador, which requires that hunters be 16 and 18. "We're seeing a reduction in the numbers of youth hunting because they have to wait until they're 16 years old to do anything," Barry explains. "They have to wait so long they lose interest. The question that I put to the minister and the premier is 'Are our youth here in Newfoundland and Labrador any different from the youth in the rest of Canada with respect to hunting?' So, with that question in mind, Barry and the rest of the Federation are proposing lowering the hunting age to be in line with the rest of Canada - 12 and 14.

It's a sensitive topic. And it's an even harder sell. People tend to bristle at any talk of kids and firearms. "That's a genuine response," Barry says. "I would say, though, that to understand hunting and firearms used for hunting, you actually have to be a hunter. The non-hunting general public has a right to be concerned, but what they're thinking is that we're going to get a kid off the streets and give him a gun and let him go. But these youth that we're talking about are already going out with moms and dads. They're already learning a lot from moms and dads. They're already somewhat experienced in that aspect. We recognize that they need to be educated and trained, and what we're suggesting is that this would occur through a mentor system - qualified, educated, responsible, ethical parents or guardians."

Here's how Newfoundland and Labrador hunting regulations currently work. Any person wanting to hunt in the province, regardless of age, must first take the Firearms Safety/Hunter Education Course offered by the provincial government to anyone 12 years of age or older. Once that's completed, people 18 or older can apply for their firearms licence. (A minor's firearms permit is available at 16, but is only given out after an interview process.) No one can legally hunt without completing the course, and no one under 18 (16 with a minor's permit) can legally own a firearm. This means that even if a 16-year-old gets a small game licence, he or she can't simply go out by themselves - they must be accompanied by a guardian who is at least 18, who has also completed the course and has a firearms licence. Only in this particular situation can a 16-year-old hunt with a firearm. If the hunting age is lowered to 12 and 14, the same rules would still apply.

"The thing that comes up though," Barry says, "is that if you have a class of kids taking the course, they can't be instructed in the same way as an adult would be instructed. The need has to be recognized that teaching kids may take longer, the course may need modifications and so on. What we're proposing is something like our Youth Hunting Program - a volunteer-based program aimed at instructing youth and their mentors, who can be either mom or dad, grandma or granddad, aunt or uncle.

"The youth will go out with their mentor under direct, qualified supervision - eye to eye. And, most importantly, we share a firearm. The mentor carries the firearm at all times. When the game is located and everything is safe, the mentor gives the firearm to the youth, who then goes through the proper procedure, making sure everything is safe with the gun. Once the target is located and everything is made safe, the youth will be given the round or rounds of ammunition and will then shoot at the game. Afterward, they will pass the firearm back to the adult and retrieve the game. After a period of time, the mentor, after looking at the youth, may let the youth carry the gun a little bit. This is a long process. We're not talking about just giving a 12-year-old a gun and going. What we completely stress is public safety."

As Barry sees it, those who choose to make hunting part of their lives and share that with their sons and daughters are not only passing down traditions, but also raising their children to be better adults. "We're not living in a perfect world. All hunters may not be ethical, just like all sports players may not be ethical and all businessmen may not be ethical. But if a well-qualified, educated, ethical mom or dad takes their child out, they're going to instill those values in them. If youth do have the opportunity to experience it at a younger age, they're going to grow up into more responsible people.

"I want people to be able to take their kids out to experience what nature has to offer. While they're out experiencing that, they're learning valuable things: conservation, ethics, responsibility, family. And all in a qualified, safe, directly supervised environment, so that we can share the traditional, cultural and familial experiences that I grew up with. I want to be able to ensure that my son has the same opportunity to a right that the rest of Canada has." - Story by Grant Loveys

Downhome recently received the following feedback from a licensed guide who is strongly against the move to lower the hunting age. Listen below.

What do you think about lowering the hunting age in Newfoundland and Labrador? Leave a comment on this article or voice your opinion by leaving a message on our toll-free Submission Phone Line at 1-866-640-1999.

..... this whole fairy tale must have been created by someone who has never hunted Big Game in their life! Now, on a more serious note. Why doesn’t the Provincial Government ask for a VALID PAL prior to selling hunters in Newfoundland & Labrador a Big Game/ Small Game including Coyote/ & Seal ? This is so irresponsible of our Government, in fact, they claim ( it’s a Federal Question!) when you ask (Why Not Check a Hunter’s PAL?) .....Yet Canadian Tire does when you ask to LOOK at a firearm❗️Now, get ready legal gun owners, Bill C-71 is on the way. Who do you think is going to be buried in paperwork and new rules then?