They Stood On Guard 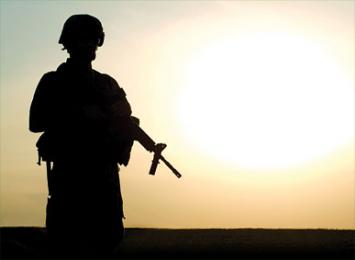 The men and women of the Canadian Forces journey into places the rest of us can hardly imagine. They witness the devastation of poverty, the ravages of war and grapple daily with the uncertainty of life. They are heroes, without a doubt - but they're also human. And eventually, if they're lucky, those humans come home.

But setting foot on home soil marks the beginning of another war for many of our veterans, as they wage battles against post-traumatic stress, physical injuries, unemployment, and the list goes on. Below is a sample of the many programs that assist our country's veterans after they've served.

Veterans Transition Network*
The VTN is a national non-profit organization that assists Canadian veterans as they re-integrate back into civilian life. The Network offers support to those who return from combat with PTSD-related symptoms, which often leave them unable to communicate with loved ones or find a meaningful career path. The organization's group-based Veterans Transition Programs (VTPs) give veterans a place to help each other past the obstacles that stand in the way of happy, healthy, productive lives as civilians.

Transitioning Canadian Forces members living in Newfoundland and Labrador and the Maritimes who wish to attend a VTP are encouraged to contact Doug Allen (Atlantic Branch VTN Recruitment Coordinator) via email at doug@vtncanada.org. vtncanada.org

Project Healing Waters Fly Fishing Canada*
PHWFFC serves military personnel who have been wounded, injured or disabled, by aiding their physical and emotional recovery through fly fishing and fly tying. Skills are introduced to the novice fisherman or rebuilt through fishing outings and other activities that can ultimately lead to enjoyment of a lifelong recreation. projecthealingwaters.ca

Outward Bound Canada Veterans Program
Outward Bound Canada offers weeklong adventure-based resiliency training for veterans in the Canadian Rockies. Open to all current and former members of the Canadian Forces, it is an opportunity to connect with other veterans in a supportive environment. Veterans have the chance to share deployment and post deployment experiences with like-minded peers, experience a time of personal renewal and reflection and learn some new outdoor and leadership skills while enjoying the landscape they served to protect. www.outwardbound.ca

Soldier On
Soldier On was founded in 2006 to empower retired and serving members of the Canadian Forces with an illness or injury (visible or non-visible) to accept their new normal by adopting an active lifestyle through participation in physical, recreational or sporting activities. www.cfmws.com

Military Minds
Military Minds is raising awareness of the stigma around Post Traumatic Stress Disorder (PTSD). It all started in 2011 when founder and Canadian Forces veteran Cpl. Chris Dupee of Barrie, Ontario bared his soul about his struggles with PTSD in a video (below) that quickly went viral when posted online. Now, the organization Dupee founded provides an online forum for veterans suffering from PTSD to connect with other soldiers and vets.
militarymindsassociation.com
www.facebook.com/MilitaryMindsYT
twitter.com/Military_Minds

Treble Victor Group
A not-for-profit networking organization for ex-military, the mission of the Treble Victor Group is to enable veterans to achieve their full potential in the marketplace, through the group's common values, teamwork, mentorship and connectivity. www.treblevictor.org

Wounded Warriors
Founded in 2006, Wounded Warriors Canada is a non-profit organization whose overall mandate is to help any veteran in need as they transition to civilian life, particularly those who have been wounded or injured in their service to Canada. woundedwarriors.ca

Royal Canadian Legion
The Legion Service Bureau Network serves veterans, members of the Canadian Armed Forces (CAF), RCMP, and their families by representing their interests with Veterans Affairs Canada and the Veterans Review and Appeal Board for disability benefits under the Pension Act or the New Veterans Charter. www.legion.ca

The Government of Canada also offers a wide variety of services and supports to veterans who are transitioning to civilian life. Many of those programs are outlined here.

*Find the full stories on the Veterans Transition Network, Project Healing Waters and Based in Business in the November 2013 issue of Downhome.
MORE ARTICLES
load more