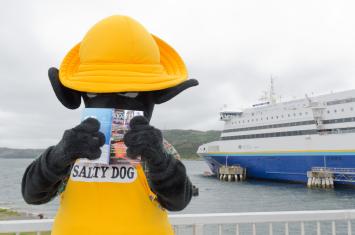 In late August, the Downhome crew were invited to spend a day on board the Marine Atlantic ferry Atlantic Vision, led by Downhome mascot Salty, to mark the end of the first summer of Downhome serving as Marine Atlantic's onboard publication.

From the bar to the bridge, from cabin to kennel, Salty was given a tour of the entire ship before it left Argentia for the journey to North Sydney. That tour included a visit to an area few passengers get to see firsthand - the ship's bridge. From his post, the ship's master, or captain, offered insight into this vessel.

The Atlantic Vision is one of the largest ferries in the fleet, and has a crew of 97 on board, including passenger services staff, said Master Michael Andrews. The master, quartermaster and chief officer are on deck for each port entry and exit, with three people on the bridge at all times during sailing.

The bridge has a panoramic view, and even has a window in the floor that looks down onto the waves far below. The bridge stretches the entire width of the ship and has three stations. The large ship - it's 203.3 metres long - can be steered from any of the three stations on the bridge, and the crew is aided by an electronic navigation system.

When it's time to sleep, the ship has 150 cabins, including deluxe cabins that look like hotel rooms. (Salty tested out one of the beds and gave it "paws up" for comfort.) For those who don't want a cabin, there are 200 reclining seats to relax in during the overnight trip from Argentia to North Sydney, Nova Scotia.

The ship also has a room to hold animal travel kennels - Salty checked that out, too - and an outdoor deck area for two-legged passengers to enjoy the salty ocean air.

Here are some snapshots from Salty's inside look at the Atlantic Vision. Salty ponders a few purchases at the terminal gift shop. After trying to make off with some gift shop souvenirs, Salty lands himself in a momentary spot of trouble...but those puppy dog eyes save him every time. Marine Atlantic passengers are pleasantly surprised to see Salty. Afterall, it's not every day you meet a giant Newfoundland-Labrador mix! Salty couldn't wait to get his paws on the vessel's high-tech controls. Fortunately, the Atlantic Vision remained safely in the hands of Master Michael Andrews and other skilled personnel! From the vessel's bridge, Salty examines the view of the province's spectacular coastline. Salty checks out the accommodations for furry passengers just like him - well, maybe not JUST like him! After exploring the entire vessel, Salty is dog tired. It wasn't easy pulling him away from this comfy cabin. At the end of his visit, silly Salty thinks swimming back to shore might be refreshing - we really need to keep a tighter leash on this adventurous pup next time! Impressed by what he's seen, Salty looks into booking his next trip aboard Marine Atlantic.
MORE ARTICLES
load more