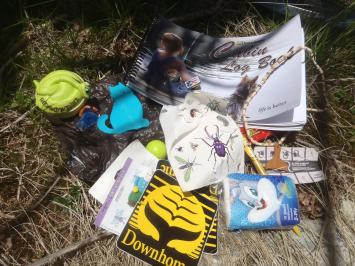 The trinkets contained in one of Downhome's geocaches

Magazine staff have hidden three Downhome geocaches in the spectacular great outdoors of our beautiful province.

For those of you who don't know, a "geocache" is a container filled with small toys and other inexpensive trinkets. Seeking them is the goal of "geocaching," a high-tech treasure hunt that spans the globe. When a geocacher uncovers a cache, he or she usually takes an item and leaves an item of theirs behind in its place. The craze started in May 2000, when a fan of GPS navigation devices and the outdoors hid the first container in the Oregon woods and challenged others on a GPS-friendly forum to find his cache of trinkets using only their devices and the coordinates he provided. Since then, a worldwide community has formed via www.geocaching.com, a website registering more than 2 million caches hidden all over the planet, placed and found by more than 6 million geocachers. To date, there are more than 6,000 geocaches hidden in Newfoundland and Labrador alone, including Downhome's contributions: Salty's Stash Cache and Downhome Puffin Pot.

Importantly, it's usually not the trinkets that lure geocachers to locations near and far (some of which are obscure and difficult to navigate) - it's the journey that leads them there and the thrill of the find that keeps them on the hunt. This is certainly true in the case of Downhome's geocaches. Finding them will lead you to the base of a huge waterfall, and along trails that skirt stunning sections of coastline with some of the province's best ocean scenery.

Click the following links to find out how you can join the ranks of those who've conquered our caches.