Want To Go Back to School? 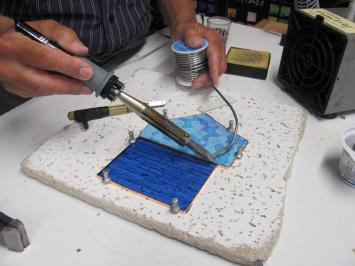 Stained glass 101
"Back to school" time isn't just about shopping for new supplies and updating wardrobes. It's about starting clean, broadening your horizons and learning lessons that will enrich your life. And who says going back to school is just for kids? This fall, learn a new way to express your creativity by taking a crafty class in something that's completely new to you. Who knows? You might just find a talent you never knew you had.

Stained Glass 101
When he retired a decade ago, Wayne Wells went "back to school" and learned the art of creating stained glass. Nowadays, he operates a home-based business called Stained Glass de-Lights and teaches the craft to others from the basement of his St. John's home. During four three-hour sessions, Wayne covers all the basic steps, from creating a pattern and cutting the glass to the final shining and waxing - and all the steps in between. For examples of his work and information on upcoming classes, click here. (Plus, see the full story on Stained Glass de-Lights in the September 2013 issue of Downhome.)

Get Hooked!
It's an art form you probably watched your Newfoundland nan perfect many years ago. Back then, hooking mats was a practical winter pastime - it was something to do during long chilly evenings, and the final product provided a warm buffer against the cold, bare floor. Today, artists are taking up this craft, ensuring those time-worn techniques aren't lost. You can be a part of preserving this traditional art form by learning to do it yourself - while using a much more modern medium. Placentia Bay, Newfoundland-native Deanne Fitzpatrick operates a rug hooking studio in Amherst, Nova Scotia and offers courses online.

Become a Potter
Ditch those fancy fingernails and learn the ancient art of pottery. At the Craft Council of Newfoundland and Labrador's Clay Studio in downtown St. John's, students can learn everything from beginner basics to clay marbling and the ancient technique of pinch potting. More experienced potters may choose to take on a new challenge during sculpting classes, or learn to create handles, lids and spouts for their pottery pieces. Click here to find the class that's right for you.

Learn to Quilt
We all hate to admit it, but a chilly winter is soon coming on - and there's no better way to stay warm and cozy than wrapped up in a quilt stitched by your own two hands. Piece Maker's Quilt Shop, located in Conception Bay South, offers quilting classes at all levels: beginner, advanced beginner, intermediate, and advanced. Find details here.

Get Crafty!
No matter your craft of choice - it's very likely that you'll find the class you're looking for at the Anna Templeton Centre in downtown St. John's. Here, you can learn to sew, draw, embroider, knit, paint, make jewellery, crochet - or just about whatever your "art" desires. Click here to find the centre's complete list of classes.
MORE ARTICLES
load more