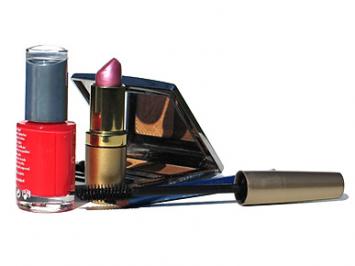 The David Suzuki Foundation's Queen of Green created a list of the harmful chemicals and additives, called "the dirty dozen," that are commonly found in cosmetics and skincare products. The list also reminds consumers to read and understand product labels. Watch out for the following 12 harmful chemicals that could be hiding in your cosmetics.

1. BHA and BHT
Used mainly in moisturizers and makeup as preservatives. Suspected endocrine disruptors and may cause cancer (BHA).

2. Coal tar dyes
P-phenylenediamine and colours listed as "CI" followed by a five digit number. In addition to coal tar dyes, natural and inorganic pigments used in cosmetics are also assigned Colour Index numbers (in the 75000 and 77000 series, respectively).

Look for p-phenylenediamine in hair dyes and in other products' colours listed as "CI" followed by five digits. Potential to cause cancer and may be contaminated with heavy metals toxic to the brain.

3. DEA-related ingredients
Used in creamy and foaming products, such as moisturizers and shampoos. Can react to form nitrosamines, which may cause cancer. Harmful to fish and other wildlife. Look also for related chemicals MEA and TEA.

4. Dibutyl phthalate
Used as a plasticizer in some nail care products. Suspected endocrine disrupter and reproductive toxicant. Harmful to fish and other wildlife.

6. Parabens
Used in a variety of cosmetics as preservatives. Suspected endocrine disrupters and may interfere with male reproductive functions.

8. PEG compounds
Used in many cosmetic cream bases. Can be contaminated with 1,4-dioxane, which may cause cancer. Also for related chemical propylene glycol and other ingredients with the letters "eth" (e.g., polyethylene glycol).

9. Petrolatum
Used in some hair products for shine and as a moisture barrier in some lip balms, lipsticks and moisturizers. A petroleum product that can be contaminated with polycyclic aromatic hydrocarbons, which may cause cancer.

10. Siloxanes
Look for ingredients ending in "-siloxane" or "-methicone." Used in a variety of cosmetics to soften, smooth and moisten. Suspected endocrine disrupter and reproductive toxicant (cyclotetrasiloxane). Harmful to fish and other wildlife.

12. Triclosan
Used in antibacterial cosmetics, such as toothpastes, cleansers and antiperspirants. Suspected endocrine disrupter and may contribute to antibiotic resistance in bacteria. Harmful to fish and other wildlife.