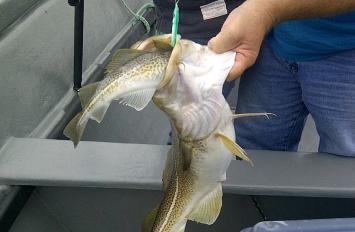 It's a cod-eat-cod world. "This was caught by my aunt who was visiting from Nova Scotia," writes the submitter. "I am wondering if it counts as one fish or two?" (Submitted by Victoria Lethbridge)
In the midst of the annual food fishery, folks are heading out on the bay in droves in the hopes of securing a few meals of codfish. Many are catching their quota - along with an ugly sculpin or two. But some fishers wind up coming face to face with strange or unexpected creatures that make for some truly shocking Kodak moments on our lakes and oceans. When fisherman Paul Mulrooney hauled his cod nets near Bread and Cheese Islands in Placentia Bay a few years ago, he found a very unexpected bycatch: a Porbeagle shark weighing 407 lbs and measuring eight feet in length. "The shark was too big for Paul to handle on his own as it was tangled badly in the nets so he had to tow it alongside of the boat from Bread and Cheese to Arnold's Cove wharf - for sure a couple of miles," writes the submitter. "It sure drew a lot of attention on the wharf that day." (Submitted by Leslie Crann) This rare lobster looked like it was already half boiled when Garwin White of Trout River pulled it from his trap. (Paul Brake photo) Allan Cumby thought he'd hooked the bottom when he started reeling in this 34-lb, 42-inch-long lake trout. After a 20-minute battle, he finally hauled the giant ashore. This giant lobster caught in Conception Bay South, Newfoundland in 2008 tipped the scales at 16 lbs. Shockingly, it's just a baby compared to the largest lobster ever caught - a 44 pounder trapped near Nova Scotia in 1977. (Submitted by Lauralee Porter) A Newfoundland fisherman hauled in this scary looking creature several years ago. These two fishing buddies took to the waters off McCallum, Newfoundland in search of sharks - and boy, did they ever find what they were looking for, successfully catching nine in two days. "The photo included is one we brought aboard for a photo op," writes the submitter. "I talked to the shark, telling him to behave and after he said 'cheese' we let him go back with the rest of his toothy friends. (All sharks were catch and release.)" (Submitted by Cliff Parsons)