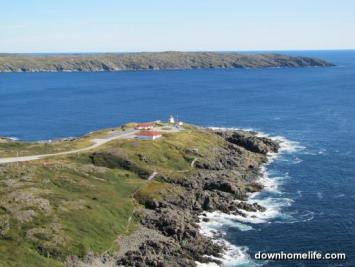 Fishing Point, St. Anthony, is the starting point for several scenic hikes. (Brian Twyne photo)
So, you want to explore the great outdoors and find secluded places that offer spectacular coastal scenery - but the truth is, your legs just aren't what they used to be. Lucky for you, there's no need to stay holed up in your house during hiking season. While you mightn't be able to conquer the famous 16-km hike that leads to and from Gros Morne Mountain, there are scores of trails and paths throughout Newfoundland and Labrador that don't involve gruelling climbs over difficult terrain. The following is a list of hikes considered easy enough for most hikers, without skimping on scenery. Of course, only you know what you're capable of, so judge accordingly.

Manche Village Path
Several paths lead to La Manche Provincial Park and the former settlement of La Manche - but if it's a shorter hike you're looking for, use the community of Bauline East as your entry point. From here you'll walk an easy 2.7 kilometres along the East Coast Trail. Here you may continue across the suspension bridge, which leads to the abandoned village where only headstones and crumbling foundations of houses remain. Camping is available nearby. (Shawn Bursey photo)

Fishing Point
This scenic spot in St. Anthony (pictured above, right) is the starting point for four excellent trails - three of which are rated easy with estimated completion times of 30 minutes each. Cartier's View Trail leads to a view of St. Anthony Bight Harbour, while the Iceberg Alley Trail skirts the tip of Fishing Point Park. The Whale Watchers Trail offers awesome ocean views and - as the name indicates - is a great spot to watch whales in season. (Brian Twyne photo)

Gravels
The narrow isthmus that connects the Port au Port Peninsula to the rest of the island is home to this gem of a trail. Hikers enjoy a seven-km looped trail that skirts the ocean, meanders through the woods and offers spectacular views of sea stacks, coves and caves, and on closer inspection, fossil sightings. Hikers also marvel at the mysterious "hoodoos" - limestone formations created by wind and waves. (Aiden Mahoney photo)

Bay Path
This 5.2-km (one way) trail spans the distance between the Irish Loop communities of Calvert and Ferryland on the Avalon Peninsula. Hikers pass through a coastal wooded area, with access to rocky beaches along the way. A side trail leads to an area known as the Gaze, which offers a stunning view of the Ferryland Downs (pictured). (Tracey Coady photo)

Mine Falls Trail
Beginning in York Harbour in the scenic Bay of Islands region, the Copper Mine Falls Trail is a scenic 0.5-km hike that leads to a spectacular waterfall. It is part of a network of trails developed by the Outer Bay of Islands Enhancement Committee Inc. (Matthew Webb photo)

Trail
Rated easy to moderate, this five-km trail near the tourism hot spot of Bonavista connects Elliston to Spillar's Cove, following a traditional path used years ago to connect the two settlements. The area is famous for its puffin and other seabird sightings, and a hike on this trail is one more way to view them - so be sure to bring your binoculars and camera. (Steven Stryde photo)

Boney Shore Trail
The latest addition to UNESCO's prestigious list of world heritage sites, you can be sure this trail will be seeing more and more travellers in the very near future. Located in Red Bay, Labrador, the Boney Shore Trail is relatively flat with gravel underfoot and takes approximately 30 minutes to complete. The path is still eerily littered with whale bones dating back to the 16th century, when Red Bay was a massive Basque whaling station. Click here for photos and details.

Cove
The trail to Spiller's Cove in Durrell on South Twillingate Island has several entry points. For a short, 20-minute jaunt, begin your adventure at Slade's Lane. At the journey's end, take a break in the horseshoe-shaped cove and marvel at the huge round rocks forced up the beach by severe wave action. This spot really shines during iceberg season. (Nick Adey photo)

Brook Falls
Rated easy to moderate, this one-kilometre long trail leads to an 800-foot waterfall and lookouts that provide awesome views of the town of Rattling Brook, located on the Baie Verte Peninsula. Hikers should be prepared for stairs! (Robert Carter photo)

What's your hands-down favourite hike in Newfoundland and Labrador? Leave a comment and tell us what it is, and what's so special about it. Better yet, share your photos of the sights seen from the trail.
MORE ARTICLES
load more