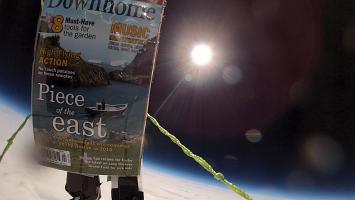 In its 25-year history, Downhome has been to every corner of the globe: from the depths of the Grand Canyon all the way to the heights of Base Camp on Mount Everest. But, on the Victoria Day weekend, Downhome reached new heights - literally.

Following up on their promise to deliver a bigger and better event, Memorial University graduate students John Hennessey and Amarnath Mukhopadhyay - who readers may remember from their images of space captured from a weather balloon camera, which appeared in the April 2013 issue of Downhome - released another balloon into the air above Newfoundland and Labrador, this time carrying a copy of the magazine nearly 40 kilometres into the atmosphere.

At 6:45 on the morning of Saturday, May 18, the pair launched a three-kilogram weather balloon filled with 400 cubic feet of hydrogen from a rock quarry near Howley, on the island's west coast. The balloon, equipped with a GoPro Hero 2 camera, a Panasonic point-and-shoot and two GoPro Hero 3 cameras (one of which was aimed directly at the issue, capturing every second of the journey in crystal-clear 1080p video), began its slow ascent through the light snow and cloud cover, eventually reaching an altitude of over 140,000 feet where it popped and parachuted gradually back to earth, landing in a copse of evergreen trees in a boggy area by the North Humber River.

"It was a bit of a challenge affixing (the magazine) to the payload box," John says. "We considered sending just the cover, but I thought 'Well, putting a Downhome cover in space isn't as impressive as putting the whole thing up there.' "

However, that was just the beginning of the challenges the pair would face during the process. The initial launch, planned for March, had to be scrubbed when the balloon broke loose of its moorings and floated away before the cameras and magazine could be attached.

On top of that, even though the May launch was ultimately successful, the trip to recover the magazine and cameras was more than they had bargained for. Thanks to some high-tech GPS tracking software, John and Amarnath were able to track the balloon as it drifted nearly 20 km northeast and locate the landing site, but the recovery mission was long and difficult due to the remote location.

"It took us 10 hours of hiking through bog to get to it. We were in chest-waders. We even slept out on the bog, basically," Hennessey says. By the time the pair reached the landing site, it was too dark to head back, forcing them to set up camp. "The hike was one of the most challenging I've ever done, but the surroundings were actually quite beautiful," Amarnath says. "The entire process was quite challenging, but really rewarding."

Ultimately, the magazine was recovered - a little worse for wear from its long trip and night in the trees, but intact - and the cameras captured stunning video footage of the entire journey. Check out this video, containing clips from Downhome's amazing adventure.