Family Fun on The Rock 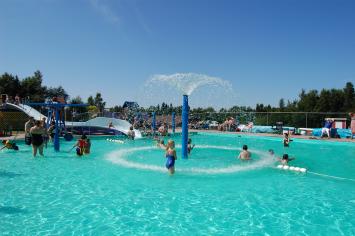 Splash N Putt
When vacationing with children, fun and adventure is the name of the game: the more slipping, sliding, racing and riding - the better. Thankfully, there are family vacation getaways located right here on The Rock that offer action-packed adventure and unique activities to entertain youngsters of any age - plus a place to lay your head for the night. Check out the following kid-approved resorts and parks, places where you, too, can let loose and celebrate the kid in you.

If you're looking for a vacation that will keep your kids' adrenaline pumping all day and have them tuckered out all night, you've come to the right place. Located on the western boundary of Terra Nova National Park, Splash N Putt is Newfoundland and Labrador's much-loved water park. The popular bumper boats offer soaking wet fun, while the youngest kids will enjoy the pool filled for them, with a small water slide and a splash fountain. Head to the 18-hole miniature golf course, get their motors running in the bumper cars or take a spin around the go-kart track.

The Mary Brown's on site is sure to satisfy any case of the munchies, plus Mary's Diner offers all-day breakfast. The dairy bar will help the family cool off with a milkshake or frozen treat. If you find yourself wishing the fun never had to end, extend your stay at Splash N Putt Cabins and do it all over again tomorrow. For more details on the fun that awaits at Splash N Putt, click here.

The Lakeside at Thorburn
10 minutes west of Clarenville, NL

adventures awaiting at The Lakeside at Thorburn will entertain kids of all ages. Older kids with a need for speed will have a blast driving go-karts, or tube riding and water skiing on scenic Thorburn Lake. Younger children will enjoy wiling away their time at two playgrounds and participating in craft and outdoor activities organized by the resort's recreational director. Those who enjoy a leisurely pace may lounge on the sandy beach, or explore the lake in a canoe, kayak, rowboat or pedal boat - all available for rent. The resort's two enclosed pools ensure a day of fun can't even get rained out while vacationing here. And every Friday evening until Labour Day is movie night, complete with complimentary popcorn and drinks.

Satisfying hungry bellies is the on-site take-out, famous among vacationers for its "Moose Ears" - Lakeside's distinctly Newfoundland take on the Canadian BeaverTail pastry. When the day's done, rest your head in the motel or at one of 105 semi- and non-serviced campsites. A 12-bunk loft located above the motel offers convenient accommodations for larger groups. To find out more about The Lakeside at Thorburn, click here.

junkies will squeal with delight while sailing down the 200-foot waterslide, and all ages will have a blast splashing around in the heated pool. Kids can dry off while putting around the miniature golf course or having a ball on the resort's two playgrounds. Plus, there's rainy day fun to be had in the arcade room.

Meanwhile, moms and dads, either can kick back with a drink or shoot some pool at the resort's lounge. And the on-site restaurant serves up wings, burgers, hot dogs, poutine and more. Based on traveller reviews, we recommend staying at the resort's campground, featuring more than 80 fully serviced RV sites and numerous tent sites, situated in the beautiful countryside of the scenic Humber Valley. Find Funland Resort online here.

thing's for sure: this ain't no gravel pit! Families who spend their vacations touring the province in a recreational vehicle might want to plan a stay at Square Pond Friends & Family RV Park. Kids will be thrilled to participate in a line-up of exciting activities, including scavenger hunts, crafts, hay rides, outdoor games and campfires - all complimentary and organized by the park's enthusiastic staff. On Wednesdays and Saturdays, pay $2 to join in the park's popular ice cream parties. (Square Pond donates all proceeds from the parties - $20,000 over the last six years - to the Children's Wish Foundation.) An especially fun time at Square Pond is Labour Day weekend, when Halloween magically comes to the park - complete with trick-or-treating from trailer to trailer, and prizes for best costume and best-decorated campsite. At the pond, families can take advantage of a boat launch, or try their luck for a trout or two. And a river at the park's boundary offers excellent salmon fishing opportunities.

Campers stay at one of 106 sites, some of which are equipped with Bell ExpressVu satellite television. The park's comfort station contains a convenience store (selling ready-to-bake pizza and garlic fingers), laundromat, washrooms, showers and arcade games. Check out their website here.