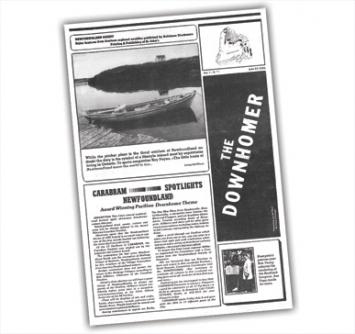 The pages of the first ever Downhome, published June 22, 1988 are yellowed, tattered and torn. We have only one copy of that issue left and, despite its poor condition, we treasure it. Its aged appearance serves as a reminder of how far this magazine has come.

The first issue of The Downhomer, as it was then called, was 12 pages long and presented newspaper-style. Our inaugural "cover" image was a typical fishing boat, accompanied by the following explanation, "While the pitcher plant is the floral emblem of Newfoundland, no doubt the dory is the symbol of a lifestyle missed by most expatriates living in Ontario. To quote songwriter Roy Payne, 'The little boats of Newfoundland mean the world to me.'"

Inside, articles cover everything from master fiddler Emile Benoit and the 10th anniversary of the Stephenville Theatre Festival to Clyde Wells' criticism of then premier Brian Peckford. Click here to have a peek for yourself.

I still have it in mint condition.