Our Most Amazing Sea Stories 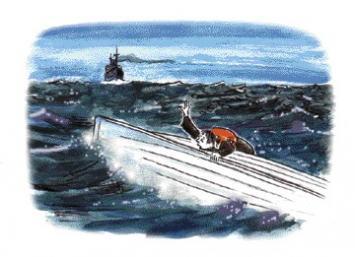 In a province founded on the backs of fishermen there is no shortage of shocking tales about ships braving the high seas. Over the years we've honoured our seafaring history through in-depth interviews with survivors and historical accounts of sunken ships, brave sea captains and Navy heroes. In the March 2017 issue, we take a look back at the best sea stories we've published in our 29-year history.

Mystery on the Water

In this shocking story, originally printed in the January 2000 issue of the magazine (then called Downhomer), two fishermen from Port Saunders, Newfoundland describe the day their boat was "attacked" by a whale. It's probably the tallest true tale we've ever heard.

At Downhome, we delight in bringing you stories "straight from the horse's mouth," so to speak. More than a decade ago, founding editor Ron Young chatted to a Bell Island man with childhood memories of submarines sinking ships near his home. This personal account was so palpable, in his wisdom Ron printed the interview uninterrupted, in its entirety.

In this 2002 story, a man recounts the details of being aboard a fishing boat in Placentia Bay during the legendary August Gale.

Putting the Past to Rest

Today, most people remember the tragic Truxtun and Pollux shipwrecks off St. Lawrence for the inspirational tale of Lanier Phillips, an African-American man who was moved by the kindness shown to him for the first time by white people, the people of Newfoundland. But we found another man who survived that ordeal. His story might not be as well known, but we feel it is just as powerful. Edward Lewis' story appeared in the November 2006 issue of Downhome.

The Legend of the SS Ethie

In 1919 the Steamship Ethie ran aground near Cow Head, Newfoundland during a winter storm. While the ship's passengers had a scary journey off the sinking ship on a bosun's chair, an infant onboard endured a more perilous rescue. The youngster was placed in a mailbag and sent to shore dangling dangerously from a rope. Downhome found that "mailbag baby" 87 years later, and shared her story.

When the Germans attacked a convoy of 37 vessels during World War Two, a single escort ship - HMS Jervis Bay - was left with the deadly task of facing the formidable enemy. Few survived the incredible ordeal, including Newfoundlander Art Taylor. He spoke to Downhome in 2008.

The Second World War really hit home for Newfoundlanders and Labradorians when a German submarine torpedoed the SS Caribou, a passenger ferry carrying innocent civilians. An off-duty Navy man on his way home to Cottrell's Cove, Newfoundland was onboard that tragic day. He contacted Downhome in 2011 and shared his amazing story of survival.

A member of the Royal Navy during WWI, Oliver Batt's story is a special one. Not only is it harrowing, but the full details of what he went through when his ship was torpedoed were not found until after his death - in a haunting letter the Herring Neck native had written to his mother.

A member of the Merchant Navy during the Second World War, St. John's native Thomas Goodyear shared his story of a brutal attack, an unlikely rescue and ultimately, forgiveness for the unthinkable, in the December 2009 issue of Downhome.

Downhome remains committed to honouring our province's brave seafarers. Do you have an incredible story of survival? We'd love to hear about it. Click here to send us a letter.