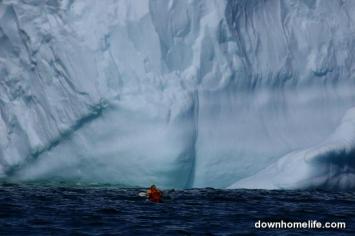 This massive berg really dwarfed a kayaker paddling near Cape Bauld on Quirpon Island, near the tip of Newfoundland's Great Northern Peninsula. (Michele Wiest photo)
A leisurely drive through the small communities that dot the shoreline of Iceberg Alley in spring and early summer practically guarantees an iceberg sighting or two. And if you get really lucky, you won't need to bother hopping aboard a tour boat or peering through binoculars for a better view. Below is a selection of photos of some of the biggest bergs we've ever received. A tour boat gets an up-close look at a massive berg that floated into Long Point, Twillingate, NL in July 2007. Submitted by Lisa Hull of Orangeville, Ontario According to the submitter, this is "the biggest iceberg ever in our bay!" Submitted by Norma Sacrey of Ming's Bight, NL Tourists and locals alike were amazed at how close this iceberg came to the shore in Summerford, Newfoundland. Submitted by Angela Leyte of Regina, Saskatchewan Folks came out in droves to view the monstrous icebergs that floated into Quidi Vidi Gut in 2012. Submitted by Tracey Sheehan What this iceberg lacks in above-water length, it sure makes up for in height. Submitted by Arlene Talbot of Englee, NL The submitter points out this berg looks a little like a cruise ship; we're betting it's not nearly as cozy, though! Submitted by Joyce Morgan of Port de Grave, NL