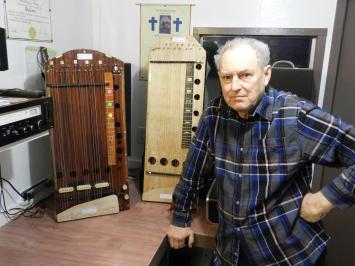 Oliver Vardy poses in his workshop beside two melody chord harps he made himself.
Downhome's Grant Loveys recently visited the workshop of a man we've dubbed the "Shoal Harbour inventor." Oliver Vardy spends his days thinking up and constructing new and unique musical instruments. Perhaps the most unique is an invention that Oliver calls the Melody Chord Harp. It is essentially a combination of guitar, harp and lap steel, with elements of each instrument working together in a totally new way. Its five individual sets of guitar strings are each tuned to a particular chord. Parallel to these strings is a single string that can be plucked with the thumb and a metal slide, providing a haunting melodic accompaniment to the strummed chords. It's a strange little machine, but it sounds wonderful.

Watch and listen as Oliver strums a tune.

For the full story on the Shoal Harbour inventor, see the May 2013 issue of Downhome.
MORE ARTICLES
load more