The Coolest Videos of... 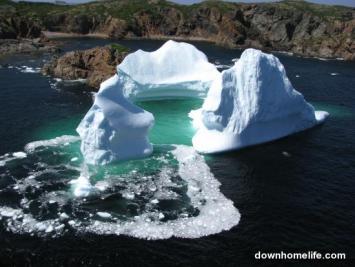 Icebergs are a common sight around Newfoundland and Labrador in spring and summer - but witnessing the awesome sights and sounds of a foundering iceberg is a little more rare and even more special. (Sheila Castonguay photo)
Big waves, whales, icebergs, seabirds, moose - you get the picture. In the May 2013 issue, we explore some of the very best places to spot icons of Newfoundland and Labrador. Below is awesome video footage of some of our iconic treasures.

BIG Waves
On windy days, the shores of Middle Cove Beach on the Avalon Peninsula are lined with folks eager to see amazing wave action. But in 2010, some wave watchers got a rude awakening from Mother Nature when a rogue wave washed ashore on Middle Cove Beach. Check out this YouTube video of local news coverage of the phenomenon.

Icebergs
In a province where two communities (St. Anthony and Twillingate) lay claim to the title "Iceberg Capital of the World," folks eager to see and photograph these glacial wonders are right to come here in search of them - and each spring and summer they do, in droves. But a group of tourists visiting Twillingate in July 2008 got an extra special iceberg sighting, as a giant berg foundered and fell into the churning waters before their very eyes.

Moose
We scoured YouTube for cool video footage of a moose - and this tourist's close encounter atop Gros Morne Mountain was, we felt, the most impressive. (Warning! Some mild foul language in this video - and who can blame her?)

Caribou
Residents of Buchans, Newfoundland will likely remember this very special 1980s episode of CBC's "On the Road Again," hosted by Wayne Rostad. The quality of the video isn't the greatest - but the quality of the story makes up for it!

*Note: For long-time readers of Downhome, the magazine's illustrator, Snowden Walters, used Clarence the Caribou as inspiration for a series of cartoon sketches that appeared in The Downhomer in the 1990s. Click here to check them out.

Newfoundland Ponies
Our province's heritage breed are known as hardy workers, used to plough fields and haul logs. But the Newfoundland pony featured in the video below, owned by passionate pony promoter Liz Chafe of Cappahayden, Newfoundland, is blessed with a rather unusual talent - we're fairly confident he'd make for stiff competition on any soccer field.

Actors & Re-enactors
The folks acting at L'Anse aux Meadows National Historic Site have to reach far back in time to get into their characters. In reconstructed sod huts Viking re-enactors mimic the Norse ways of life that played out here more than 1,000 years ago.

Lighthouses
Watch this video and come along for a tour of the Point Amour Lighthouse, the second tallest lighthouse in Canada, located at L'Anse Amour, Labrador.

Traditional Boats
Placentia-native and master boat builder Jerome Canning details the province's historic boat building tradition in the following video. With the help of the Wooden Boat Museum in Winterton, Newfoundland, locals with knowledge of the now rare art form are passing the tradition to younger generations.

Seabirds
The puffins of Elliston usually prefer to stick to a small island a short distance from the headland - but this one decided to wander over for some close-up camera shots!