25 Tips for Surviving Winter in N.L. 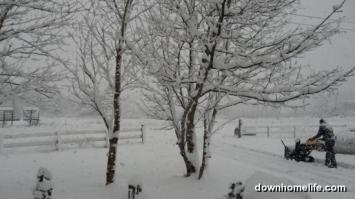 No. 9: Love thy neighbour...who has a snow blower. (Sandra Murphy-Barrett photo)
A somewhat tongue-in-cheek approach because, hey, you gotta have a sense of humour to survive our winters!

1) No matter how much money you spend on winter boots, you'll still need to wear grocery bags over your socks to keep your feet dry inside them.

2) Stock up on Vienna sausages, beans and anything that can be eaten cold out of the can, for those long winter nights when the power's out.

3) Invest in a generator to power the important things...like your laptop.

4) Keep a shovel inside the porch, so you can shovel your way out of the house.

5) Keep extra kitty litter on hand - so Fluffy still has a place to "go" after you've dumped a full bag of her litter on the icy driveway.

6) Pick out a winter coat that's three sizes too big - allowing enough room for several wool sweaters to fit underneath.

7) Watch the forecast every evening - and prepare for the exact opposite.

8) Never shovel into the wind. Do it once and find out why.

9) Stock up on DVDs to watch on the many nights when a single, sticky snowflake will put your satellite dish out of commission.

10) Love thy neighbour...who has a snow blower.

11) Get up early enough to shovel the driveway twice: Once before the plow comes, and once after it leaves.

12) Pedestrians in St. John's should invest in sturdy rope and a professional belayer, to safely traverse the giant snow banks where once there were sidewalks.

13) Have four MATCHING winter tires. (Not one winter, two all-season and one random one you found in your garage.)

14) Never pull out to pass a long line of slow-moving traffic during a storm - because at the front of that line is probably a police car.

15) Never pass a snow plow during a storm. IT HAS A PLOW. Why would you want to go first?

16) Invite your mother-in-law to stay with you during the winter. You'll need her to babysit your kids when school is closed every other day.

17) Before winter sets in, master the crab walk. When the ground is a glistening sheet of ice, it's the only way you're getting from your front door to your car.

18) Store bags of sand in the back of your truck - not for sprinkling on slippery sections, but for ballast, to keep your pickup from sliding all over the road.

19) In advance of the first snowfall, drive (at minimum) six-foot-high brightly coloured stakes into the ground at the bottom of your driveway, so once snow falls you'll know where it ends.

20) Invest in good rubber car mats. Placed under tires while spinning on an icy patch, they make for great traction.

21) Keep wet wipes in your car for days when road salt is so caked onto your headlights, you can't tell if they're on or off.

22) Consider investing in a therapy lamp to brighten your winter days - don't wait for the sun to do it.

23) Visit the oldest, dustiest electronics aisle in any department store and pick up a CORDED phone. This outdated device may be your only line of communication to the outside world when the power's out and your cell phone's dead.

24) Purchase a car charger for your cell phone. You may need it to call a tow truck from one of our famous highway drifts.

25) Only purchase two-piece snowsuits for your youngsters; urgency to "go potty" is much greater when clothing removal is more difficult.