Not Your Average Christmas Trees 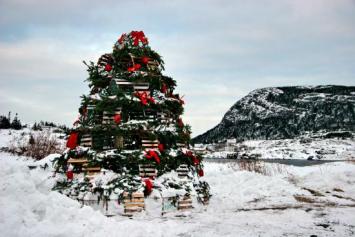 Do you think your Martha Stewart-inspired Christmas tree is a real show-stopper for Santa? Think again.

Have a look at our readers' most extraordinary Christmas trees. With inspiration like this, maybe you'll be the one surprising Santa this year! year I put up a Christmas tree with nothing but ornaments that have something to do with the accordion. I add to the collection every year. Then I put the presents under it - which are my real accordions. That way, they are always close by during Christmas to crank out a tune." - Wade Purcel, Shea Heights, NL

Head Over Heels for Christmas "I thought you would enjoy seeing my inverted Christmas tree with a village underneath it - or should I say, on top of it." - Leona Kirk, ON "One year we spent Christmas away from home, so instead of buying decorations we made (well, drank) our own." - Nikki Ralph, Burnside, NL

Money Does Grow on Trees "My 14-year-old (Sarai), seeing my love of Canadian Tire money, collected it and decorated the Christmas tree with it - more than $100. I can't wait to go on Boxing Day and get a bargain." - Anthony Greening, AB Instead of chopping down a living tree, the submitter decided to dress up one of her houseplants for the festive season. - Kim Martin, London, ON "My son found this Christmas tree just standing there, fully decorated, while walking along the seaside in Kippens. It was put there by a Mr. Bougeois from Kippens and decorated by the White sisters. This has been their tradition for a number of years, just because they love Christmas." - Patricia Ballard, Grand Falls-Windsor, NL "My husband and I couldn't decide if we should buy a new Christmas tree or not, so one day we went for a walk and I suggested we get the worst Christmas tree we could find. This is what we came up with." - Yvonne, Twillingate, NL "Each year, my wife Dale puts up her Newfoundland Christmas tree," writes the submitter. "The tree is decorated with many different items, all from Newfoundand, that we collect when we are vacationing in Newfoundland each summer (i.e. every type of Purity product ever made...cans of salt fish under the tree; snowballs; tea-cup cakes; purity kisses; actual squid jiggers; a label from each type of Newfoundland brand beer; miniature wool socks and mitts; etc.) Below the tree is Dale's mummer collection, all made by Denise Chippett from Leading Tickles." - Clarence Strickland, Fort St John, BC

Editor's Note: Since posting this article we received the following photo and update about the "Newfoundland Christmas Tree" above.

I see Downhome posted a picture of Dale's Newfoundland Christmas Tree as one of the 10 unusual Christmas trees. That picture is at least two years old and I wanted to show how much her Newfoundland Christmas Tree has expanded since then. It is a full seven-foot tree now with every Purity product ever made either on or under it - even a salt beef bucket for a stand. Underneath, her mummer collection has nearly tripled since that last picture. Brings lots of good back-home memories all the way on the other side of Canada in Fort St John, British Columbia. - Clarence Strickland, Fort St John, BC Always nice to be a bit different 🎄