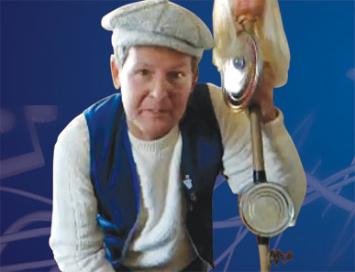 Mike Madigan of the Sharecroppers demonstrates how to play the ugly stick.
As Dale Jarvis explains in the December 2012 issue of Downhome, the traditional Newfoundland ugly stick may have its roots somewhere off The Rock. "Similar percussion instruments were known in Europe as far back as the 16th century. British Army marching bands used a stick covered with bells called a 'Jingling Johnny' into the 19th century. Today in England, folk musicians play a version of the ugly stick called a 'Mendoza' or 'monkey stick.' In Australia, it is known as a 'lagerphone,'" says Dale.

No matter where in the world you are, and whether you call it a "monkey stick," a "Jingling Johnny" or a "lagerphone," one thing remains the same: they're some lotta fun to play!

Here are some helpful videos from Mike Madigan of the Sharecroppers, for ugly stick novices.

How to Make Your Own Ugly Stick: Part One

How to Make Your Own Ugly Stick: Part Two

How to Make Your Own Ugly Stick: Part Three

How to Play the Ugly Stick