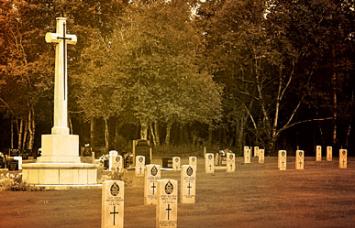 The Commonwealth War Graves Cemetery located approximately 3.5 km east of Gander, Newfoundland (Photo by Jim Cornish)
The Commonwealth War Graves Commission exists because of Sir Fabian Ware, a commander of a First World War British Red Cross mobile unit. After seeing the mounting casualties in the early years of the war, Ware wanted to find some way to ensure the war graves would be forever remembered and honoured. With his help, the Red Cross unit began recording and attending to all the graves they could find, some of which were hastily dug in the middle of the battlefields.

In 1915, Ware and his medical unit efforts were officially recognized by the British War Office and named the Graves Registration Commission. In May 1917, a Royal Charter established the Imperial War Graves Commission with Edward, the Prince of Wales, as its President and Ware as the Vice-Chair.

After Armistice Day, 1918, the work of the Commission intensified. Once land for cemeteries and memorials was guaranteed, it began recording details about each casualty. By the end of 1918, about 587,000 graves had been identified and an additional 559,000 dead and missing were registered as having no known grave.

In 1938, a year after the Commission's program was completed, war once again loomed over Europe. The Commission staff was forced to flee mainland Europe, leaving the cemeteries unattended. Ware then turned his attention toward civilian casualties. With Winston Churchill's support, the Commission created an honour roll to commemorate the nearly 70,000 civilians who died as a result of enemy bombings of civilian areas during the Second World War.

When the Allies regained control of western Europe, the Commission returned and began restoring its 1914-1918 cemeteries and memorials. Then, they began the arduous task of documenting the 600,000 Commonwealth casualties from the Second World War. The commission completed the Dieppe Canadian War Cemetery in 1949 - the first of 559 new cemeteries and 36 new memorials worldwide. To commemorate the 20,000 men and women who died in air operations over northern Europe and those who have no known grave, the Commission built a memorial to the Royal Air Force at Runnymede. In the 1960s, the Commission updated its name to the Commonwealth War Graves Commission to reflect the international effort in freeing the world from tyranny.

Today, the work of the Commonwealth War Graves Commission commemorates the 1,700,000 men and women of Commonwealth forces killed in two world wars. Their 2,500 Commonwealth War Cemeteries, burial plots and memorials are a lasting tribute to those who died in some 153 countries around the world. Although there are 19,000 Commonwealth war dead buried in Canada and the USA, the war graves cemetery at Gander is the only one under the Commission's care.