Wildlife: Up Close and Personal 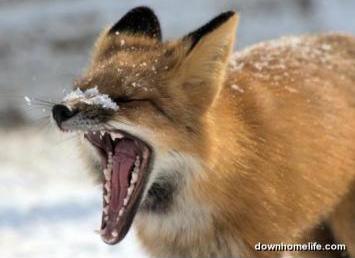 Ahhh-Choo! It seems the fall flu season doesn't just affect people. Photo taken by Neil Simmons in Labrador last autumn.
It can be hard enough to catch a far-off glimpse of some wildlife species, let alone snap a perfectly composed close-up shot with a camera. The following are some of the very best wildlife close-ups submitted to Downhome - and they prove it pays to carry a camera at all times. But remember, when photographing wildlife use your camera's zoom lens - and keep a safe distance. Melanie Whalen got this rare close-up shot of a lynx at Salmonier Nature Park. Megan Webb photographed this hare outside her home in Pynn's Brook, Newfoundland in early spring. J. Coles of Northern Ontario writes, "This bear came to see what was cooking on the BBQ, or maybe it was the Newfoundland cover he liked." Paul Regular of Bay Bulls snapped a photo of this Atlantic puffin heading for its nest on Gull Island with supper. Wanda White captured this image of a sleepy seal in Bay Bulls, Newfoundland. Melanie Whalen piqued this caribou's interest while snapping its photo on the Avalon Peninsula. Tracy Parsons had a successful day of "hunting" moose with her camera on the Burgeo Highway.