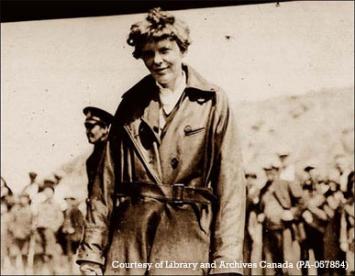 In 1932, Amelia Earhart became the first woman to cross the North Atlantic solo, leaving from Harbour Grace, Newfoundland.
Due in large part to its easternmost location in North America, Newfoundland has bore witness to many historic moments in world aviation. Of course, flying is risky business - and was especially so in its early days. As a result, this province holds a few morbid distinctions as the scene for tragic, yet historic, crashes. Read on for a timeline of history-making moments in aviation that took place right here.

June 14, 1919 - Captain John Alcock and Lieutenant Arthur Whitten Brown make the first non-stop aerial crossing of the Atlantic, taking off from Lester's Field near St. John's and landing in a bog in Galway, Ireland the following day.

May 30, 1932 - Arthur Sullivan, owner of the first commercial airline company in Newfoundland (Newfoundland Airways), leaves St. Anthony with one passenger (Dr. Kuehnet) aboard his Gypsy Moth aircraft and the pair never returns, marking the first aviation fatalities in Newfoundland.

July 12, 1933 - World famous aviator Charles Lindbergh and his wife Anne land at Bay Bulls Big Pond near St. John's, and continue on to Botwood and Cartwright to research potential seaplane landing sites on the island of Newfoundland and in Labrador.

July 12, 1933 - An armada of 24 flying boats led by General Italo Balbo land in Cartwright, Labrador as part of a flight celebrating the tenth anniversary of Mussolini's regime. The following month, the seaplanes also land in Shoal Harbour, near Clarenville.

Feb. 21, 1941 - Dr. Sir Frederick Banting, the co-discoverer of Insulin, dies in a plane crash near Musgrave Harbour, Newfoundland shortly after it took off from nearby Gander.

September 18, 1946 - Belgian Sabena Airlines Flight OO-CBG crashes into a forested hillside near Gander, killing 26 of the 44 people onboard. At the time, it was the world's worst airline accident, and the first large-scale rescue by helicopter.

Dec. 12, 1985 - Arrow Air Flight 1285 crashes less than a minute after taking off from a refuelling stop in Gander, killing all 256 people on board. Today, it is still considered the worst aviation disaster to take place in Canada.