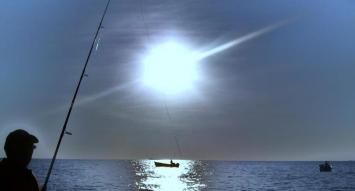 Submitted by Robert Oxford
The 2012 Newfoundland and Labrador food fishery has begun, running from July 21 to August 12. The second will start September 22 and close September 30. We'd love to share some of the awesome photos Downhome readers have already submitted to our website and Facebook page. Check 'em out! "Fishing in Newfoundland on a beautiful summer day."
Photo submitted by Angela Tippett "Taken during the Food Fishery 2012."
Photo submitted by Georgann Collins

The One That DIDN'T Get Away "Caught July 23rd, 2012, early in the morning in Sunnyside, Trinity Bay, by Jan King of Sunnyside. It was the last fish of the morning and weighing just a hair under 37 pounds, it was a whopper. I wasn't sure I could reel it in, but I wasn't letting my husband help and then take the credit!"
Photo submitted by Jan King Those are Some BIG Britches "One of the big cod caught during food fishery July 2011 near our cabin on Black Island, with a little caplin inside his mouth."
Photo submitted by Natasha Hurley

Fishing is so Relaxing "This photo was taken of Reid Thomson from Brampton, Ontario while he was visiting his Nan and Pop Gedge in Twillingate this summer during the food fishery."
Photo submitted by Sheena Thomson Look What I Caught! Ethan Pollett of Whiteway holding up his big catch of the day."
Photo submitted by Shirley George