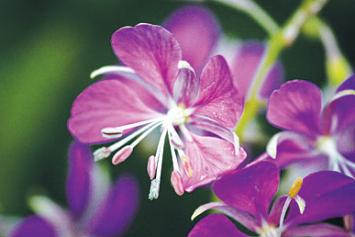 The fireweed is a medicinal plant that many people once prized for its anti-inflammatory properties. It was used as a poultice to draw out infections, as a mouthwash to soothe sore gums, and was used to treat skin problems such as diaper rash.
Throughout history, plants have been used as food to nourish us, as shelter to house us, and as medicine to heal us. And while many people may believe this latter use is no longer relevant in our modern world, the healing properties of many plants remain vital even today. For example:

• More than 40% of prescription drugs dispensed in Canada contain at least one active ingredient derived from plant material.

• Seventy-five per cent of the plants used to make modern medicines correlated directly with their traditional uses as medicinal plants.

• Digitalis is derived from Foxglove (Digitalis purpurea) and has been used since the 16th century to treat heart disease; its derivatives are still used in modern medicine. (But ingesting the plant can cause heart failure.)

• In 2007, Canadian exports of herbal plants were valued at $96 million. Most of these plants were not grown in large commercial farms, but on small privately owned plots because of the high cost of maintenance and specialized equipment.

• China is the leading country for incorporating traditional herbal medicine into a modern health care system; the result is a blend of herbal medicine, acupuncture and Western medicine. - Jim Cornish

To read more about medicinal plants - including their influence in Newfoundland and Labrador - see the August 2012 issue of Downhome.