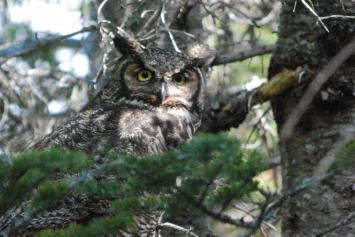 Reader Paul LeDrew photographed this great-horned owl in Little Harbour, Twillingate.
Of more than 200 species of owls in the world, six call this province home - at least at certain times of year. They include the great-horned owl, snowy owl, Northern hawk owl, Northern saw-whet owl, short-eared owl and boreal owl. Below you'll find photos and brief descriptions of each of our owls.

Also known as the "Cat Owl" in Newfoundland, the great-horned owl (pictured right) is the most common of the province's owl species. It measures an impressive 45-63 cm in length, and has upperparts that are striped brown, buff and black, a distinctive white throat and large ear tufts or "horns," which make it easily identifiable. The great-horned owl is found in a variety of habitats, from open forests to wetlands. Striking white feathers make the snowy owl stand out, with males exhibiting a brighter white than females and young owls. The snowy owl is the largest of the island's owl species, at 58-69 cm in length. They are commonly found at Cape Bonavista, near St. Anthony, and at Cape Race. Unlike most owl species, the snowy owl (also known as the Arctic or white owl in Newfoundland) is most active during the day. Northern hawk owl (36-45 cm), pictured left, is easily distinguished from other species because of its long tail feathers and hawk-like flight patterns. They hunt small birds, rodents and hares mostly during the day and are typically found in mixed or conifer forests near open areas in northern parts of Newfoundland. boreal owl (21-28 cm), pictured right, prefers to nest in existing cavities of large tree trunks and is therefore most common in heavily wooded areas. Three rows of white dots on its tail easily distinguish it from other owl species. The boreal owl is most active at night, when it hunts small rodents. Many people now recognize the Northern saw-whet owl for its starring role in a recent TV commercial for Telus Mobility. Measuring 17-22 cm, they are one of the smallest owl species in all of North America and are sometimes mistaken as tame due to their tendency to hold perfectly still until a threat passes. Short-eared owls (also known as loppers in Newfoundland and Labrador) are medium-sized birds (33-43 cm in length), which exhibit two short, horn-like tufts over their bright yellow eyes, straw-coloured upperparts with a heavily streaked, buff belly and a distinctive black patch on the underside of the wrist. Short-eared owls are mostly silent, except for a soft "toot" during the breeding season and occasional squealing at intruders near the nest. Between 2000 and 2005 there were 10 reports of wintering short-eared owls in Newfoundland, primarily on the southern Avalon. For the full story on the short-eared owl, and why it is a species of special concern in Canada, see the July 2012 issue of Downhome. To participate in the government's ongoing efforts to monitor this species, report your short-eared owl sightings by filling out the form at the end of the document, located here.

Sources: Nature Conservancy of Canada, and Birds of Newfoundland, by Ian Warkentin and Sandy Newton