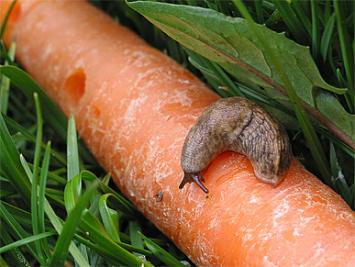 Having a picnic in your backyard or tending your garden are two great ways to spend a summer afternoon - but a slimy slug slithering its way across your picnic blanket is enough to take away your appetite, and your green thumb will only want to squish them after they feast on your lovely blooms. The following video explains how to create a slug trap.

We also asked Downhome's Facebook friends what natural remedies work best at keeping slugs out of their gardens. Here are some of their suggestions.

- Sprinkle diatomaceous earth around the perimeter of the garden. It will keep most pests away. Or, add beer to a coffee can; they go in but can't get out. - Lori Cullen Long

- Fill a small bowl with stale beer. Put it in the areas where the slugs are active. Stale beer attracts the slugs and they drown. You may also use grape juice or a tea made from yeast, honey and water. And don't blame me if your cat gets drunk! - Bruce Tizzard

- I use sawdust on my strawberry garden every year and it seems to be working fine! - Genista Wight-Macdonald

- Broken egg shell does the job; it cuts them up when they go over them. Put the egg shells around your flowers. It works. - Leonard Roberts

- Salt poured around the border of your flower beds will keep them out. You just need to re-add after a rain. It works for ants, too. - Sherrie Cormier

- Pepper works like egg shells, but you need to refresh after rain or heavy dew. Of course, salt shrivels them right up if you happen to see them hanging around. - Patti Bryant

- Very fine sand will keep them off as well. - Weldon Drodge