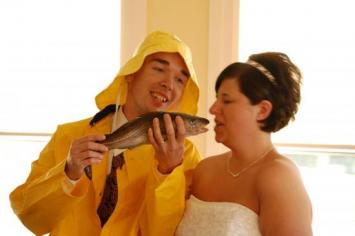 You May Kiss the Cod! (Photo by Adam Clarke)
As the weather warms and weddings get on the go, some Newfoundland brides decide to forgo the stilettos! Check out some of the best wacky wedding photos submitted by Downhome readers.

"Well it is, love," said I, "with me rubber boots on."
(lyric from traditional song "Rubber Boots") Who Knew Rubbers Could Look so Classy? The Groom's not the Only One Who's Hooked! "Couldn't You Have Done that Before the Ceremony?!" This Wedding's on Wheels! Are you a "best kind bride"? Submit your downhome wedding photos here.