The New King of the Road 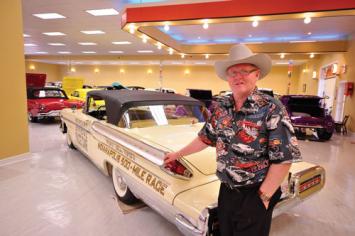 Cruising through beautiful Swift Current, Newfoundland recently, I spot the famous Mile Hill climbing to the mountains and pass by Piper's Hole River snaking its way to the ocean. Across the bay dotted with tiny islands I see Garden Cove, where kayakers and tourists depart for the short boat trip to nearby Woody Island. Then, among the wharves, boats and clotheslines I expect to find in a small Burin Peninsula town of around 350 people, I drive up to a place that's not exactly "outport typical": a showroom containing what is arguably one of the best private collections of vintage automobiles in all of Canada.

Walking through the 20,000 square-foot custom-made showroom that is "Vernon's Antique Toy Shop" is like travelling through more than a century of automotive history. I gaze down the central aisle of the museum, noticing the floor is painted like a blacktop highway complete with lane markings. In the distance I note the antique gas tanks, a pristine Coca-Cola sign, and exquisite memorabilia of garages and roadside diners of the 1950s. Pointing in from both sides are the gleaming grills and shiny headlights of antique cars of every shape and size.

I'm not even an automobile enthusiast, and it takes me a few minutes before I can say anything more than "Wow." When I finally pull my jaw up off the floor, I manage to introduce myself to the owner, Vernon Smith, who has agreed to give me a private tour. The quiet-spoken 50-something Vernon is wearing a Hawaiian shirt that, when you look closely, has antique cars on it instead of floral patterns. It is an apt clothing choice for a man who tells me, "I have always loved the automobile even since I was a little boy. I would sit here in Swift Current and watch the taxi cabs going up and down the highway, and I could name off every make and model of those big old cars."

We casually meander through the facility as Vernon takes his time to explain the intricacies of his amazing 56-car (plus about six more under restoration) collection dating from 1908 to 1970 and the numerous awards his vehicles have won at some of the most prominent car shows in North America, including Meadow Brook Concours, Amelia Island Concours and Pebble Beach. Vernon, now semi-retired, came from humble beginnings and made his money in the power-line construction field, but is pretty modest about his career, saying simply, "I feel quite fortunate. It was very good to me."

Likewise, on the obvious question of the collection's value he demurs, saying politely, "I get asked that a fair bit, but the truth is the value changes almost daily based on a number of factors." But Vernon says the cars' monetary value isn't what's important to him - it's their rarity.

"They are some of the rarest of the rare cars produced in North America," he says. "I've been told by car collectors who come here that they may see bigger collections with more vehicles, but that the calibre of the cars, the low production numbers, and the strictest standards of authenticity they see here make this a special visit for them." Swanky Sunday drives
Given the nature of the antiques, you might think that Vernon doesn't actually drive his cars; you'd be wrong. On nice days and very select occasions, he can be seen cruising around his hometown. One of his greatest joys is picking up his mother and driving her to church on Mother's Day in a different vintage car each year.

"It is always a surprise for her, as she never knows which one will show up. She has a great sense of humour and likes to joke that she gets a new car every year," says Vernon.

Vernon has even taken out some of his rarest vintage vehicles to chauffeur local high school students on their graduation day.

But one of his most touching experiences related to the car museum came awhile back when a gentleman whose father had been diagnosed with a terminal illness contacted him and explained it would mean a lot for his dad to visit the collection. Vernon's voice softens as he tells the story.

"Now I had never met this man, but I postponed my activities and made the entire collection available to them that day. I let that man stay as long as he wanted, and we talked and traded stories, took pictures with any of the cars he wanted and you know, that was something special. I don't have the words to describe what it felt like. It was like a wish come true for him and I was only glad it made him happy." Vernon tells me he donates the proceeds from admission to either the school in Swift Current or to local charities. And every year, normally in August, Vernon invites Mustang owners and enthusiasts to drive together during the "Cruise to Vernon's Antique Toy Shop," with all proceeds going to charity.

As the tour winds down I ask Vernon if his wife and family share his passion for the automobile. He smiles and says, "Well my wife Ina has been very supportive and understanding. We have been married over 30 years. She is obviously not into the cars as much as I am, but she is great and incredibly patient." Vernon surveys the museum for a second and adds with a laugh, "I have 62 children here. I know I can't go on collecting forever and I'm glad at this stage to be able to give something back, and that seeing these cars makes people happy."

Then, like every good road trip should both begin and end, I hit the highway riding along in my automobile.

Editor's Note: After his trip to visit Vernon's Antique Toy Shop, writer Dennis Flynn told us that while he was taken in by the entire showroom, one car stood out from all the rest. "If I had to name one classic car as my personal favourite, it was what Smith described as 'a 1933 Chrysler Imperial and the crown jewel of the collection.' There were only 36 of them made for that year. It has a 384 cubic inch, 135 HP inline 8 cylinder engine and suicide doors. It would have cost $3595 new in 1933, he told me. To me it is just ultra-cool. Even the silver hood ornament of a gazelle in full stride captures your attention in a room where everything demands to be looked at." can you believe this is in rural nl?

An amazing place to visit!