Are Sleeping Pills the New Cigarettes? 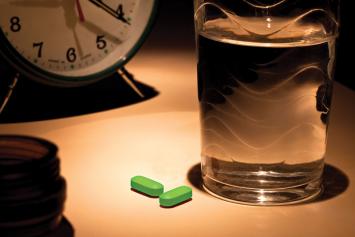 BUZZZZZ!!! You can't believe it. You finally drifted off what felt like minutes ago, and now it's time to face the day. Your brain is still foggy from the sleeping pill you took the night before. You wish you could rest without drugs, but you've been taking them so long you don't think you'll ever sleep without them.

Sound familiar? One in three people experience sleeplessness and one in 10 suffer from chronic insomnia. Pharmacists in Canada fill as many as 5.6 million prescriptions for sleeping pills annually. "The Walking Dead" isn't just a popular TV show about zombies - it's almost a global reality, with so many of us walking around in a drug-induced stupor. And by taking these dangerous hypnotics, we may be steering ourselves toward premature death.

These medications impair memory, balance and coordination. According to a recent study by the British Medical Journal (BMJ), patients regularly using prescription sleep drugs were nearly five times as likely as non-users to die over a period of two-and-a-half years. Even if you consume less than 20 pills annually, you are still at increased risk of shortened life expectancy. Heavy users are even at higher risk of developing cancer. Based on these findings, sleeping pills are sounding as dangerous as smoking cigarettes.

The problems with pills

While the scientific community considers this preliminary research, many doctors are choosing to examine insomnia's underlying triggers - stress, diet, caffeine/alcohol consumption or lack of exercise - before prescribing medication for this invisible condition. Dr. Craig Hudson, a Toronto-based psychiatrist, is one of many who recommend natural health solutions for treating sleep issues.

"The BMJ study was a sea of change in the way most people think about sleep medication," says Dr. Hudson. "Historically, the problems with drugs like lorazepam and ativan include tolerance: needing more of the same medication to have the same effect over time. Also dependence - if you stop you can have a rebound of insomnia all the way around."

Sleep, a natural, necessary human function, becomes unnatural and stressful when you're dependent on drugs to get rest, Hudson explains. He also cites the disturbance of "sleep architecture" (the five stages of sleep) as being a side effect of these medications.

Insomnia is a complex, subjective condition. It's one of the few disorders where the diagnosis lies with the patient more than the physician. While it's advantageous to uncover the underlying causes for insomnia, it can be quite difficult for a physician to address specific causes in the average short clinic visit.

The remedy is often to give them a short-term prescription for medication, as it helps them get the rest they need. But as the new BMJ study reveals, even short-term usage of hypnotics can be dangerous. Even before the BMJ release, Hudson's preferred treatment was not a chemical approach. He created the One Week to Better Sleep Program; a quick resource guide assisting in working toward naturally improved and sustained sleep patterns. It involves behavioural, environmental, and diet changes - a BED checklist, "a measure of your ability to construct your wake time in such a way that healthy sleep is available when you need it," he explains.

The BED checklist includes maintaining a regular sleep-wake time, avoiding naps, removing distractions like television or computers from the bedroom, not using alcohol as a sleep aid, and watching your caffeine intake (including hidden sources like clear sodas or mocha ice cream).

An important part of the program is calculating "sleep efficiency," or how well you are sleeping within a reasonable amount of time. "Sleep efficiency is the total time (in minutes) asleep divided by the total time (in minutes) in bed, multiplied by 100 to give you a percentage," Hudson says, adding that a rating of at least 70 per cent is a good step towards improving sleep.

Akin to a new workout regime, such a method isn't an overnight fix; but applied long-term, these natural changes can improve your "sleep hygiene" much better than any drug. According to the National Sleep Foundation, "Sleep hygiene is a variety of different practices that are necessary to have normal, quality nighttime sleep and full daytime alertness."

Hudson says the success rate of his approach is pretty good. He consulted several sleep psychologists throughout North America, developing a cognitive behavioural approach that he claims will benefit the vast majority (about 70 per cent) of insomniacs. "It works, but you have to commit to it. The success is not overnight, it's often 20-30 per cent a week, but if you do that over several months you'll notice the change."

Some natural solutions widely recommended for a more restful night include yoga, meditation and acupuncture. Melatonin - a naturally occurring compound that helps regulate other hormones and maintains the body's circadian rhythm - is available in over-the-counter supplements. It comes from the same amino acid that exists in milk, turkey and pumpkin seeds.

Hudson says that while melatonin supplements can help overcome something like jetlag, taking it consistently over time may cause some concern because "you're basically suppressing the endogenous ability of the brain to produce melatonin. If you're taking it every day, your brain isn't going to make it as much," he says.

Diet plays an unexpected but central role in how you sleep. Proteins that are high in tryptophan (an amino acid that contributes to natural melatonin production) such as nuts, red meat, eggs and legumes are best consumed no later than three hours before bed, so that the available tryptophan in your system isn't overpowered.

You should also increase your intake of carbohydrates before bed as the uptake of this essential amino acid is "greatly enhanced by the presence of certain carbs." Bread, crackers, and biscuits "naturally act to shunt the tryptophan you took in earlier in the day to the right place in your brain responsible for turning it into natural melatonin."

Hudson's sleep plan has daily menu suggestions, based around "the ideal nutritional balance that was often achieved in days of old when people ate larger meals earlier in the day and lighter 'teas' at day's end. These dietary changes right that balance again," says Hudson, perhaps giving credence to the Newfoundland tradition of a toast "lunch" before bed.

Combining these dietary actions with a psychological approach creates two pillars of sleep hygiene. Says Hudson, "You have to be disciplined about it and focused on good health."

Hudson says building confidence in getting sleep without the pills is crucial. He recognizes how these drugs help alleviate the anxiety insomniacs feel about falling asleep, but they only work for the short-term. After awhile, many insomniacs just give up on a good night's sleep due to increasing demands of a compressed modern society featuring more entertainment options distracting us from rest.

"You can get on the computer, watch television, and listen to the radio. Forty years ago you couldn't watch a whole lot of television late at night," Hudson points out.

According to the National Sleep Foundation, problems with insomnia are increasing alongside the rising prevalence of "screens" in our lives - TVs, laptops, smart phones, and e-readers/tablets, whose rapid information access often make our brains alert and distracted when they're supposed to be slowing down.

Our instant-gratification society also works against doctors' efforts to apply natural solutions to insomnia. "People want quick responses to everything; it's the same as wanting sleeping pills at the doctor as a quick solution. If you say to them, 'We have to work on this slowly over months,' that's not very compelling. People are frustrated in our Blackberry society, by the lack of a sophisticated solution to a complicated problem," Hudson says.

"Unfortunately, as you can see from the BMJ study, despite really good efforts and science, modern medicine does not have a good solution to chronic insomnia."

The importance of making healthy and natural lifestyle changes in order to overcome insomnia and wean off prescription medication is more relevant now than ever due to increased health concerns and risks surrounding sleeping pills.

For those working towards a healthier lifestyle, Hudson offers encouragement. "As long as you're not doing anything destructive, I think you're further ahead. Any kind of behavioural component change that helps you relax and be calm is good."

Interested in trying Dr. Hudson's One Week to Better Sleep Program? You can view it for free on his website.