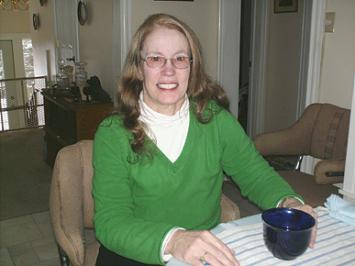 At 57, I am entering yet another life phase as I age with spastic diplegic cerebral palsy, a fixed neurological condition affecting, in my case, mobility. I am still uprightly mobile, much to the consternation of many around me who felt I should have taken a seat (in a wheelchair) years ago. I continue to stand and move, one clumsy foot at a time - causing myself considerable pain - so that I may maintain independence in my own home, in my own space, with my own "stuff" around me. Each day I wake and pray that this is not the day it's all going to be taken away. One misstep; a drag of a foot to catch on a stray piece of dog kibble; a hand missing a counter, a table or a chair for balance, and I could fall and be forever paralysed by a severe blow to my already acutely compromised spine.

Then, believing they know what is "best," a parade of specialists will attend to me: doctors of rehab medicine, orthopaedic surgeons, physiotherapists, occupational therapists and social workers. They consult to develop a plan for me, but do they consult me? Therein lies the dilemma of growing old with a since-birth disability - being once again treated like the children we left behind years before. What is overlooked by so-called "specialists" is that the aging person with a disability is grieving - mourning a loss of independence, of freedom. In their efforts to be helpful, those specialists unwittingly alter the landscape: "Let's move her here - No, let's move her there." But, I don't want to move out of my home, dammit!

Jean Vanier, in Our Journey Home writes, "Our task is not to shape reality, but to accept and discover within it a light, a new love, a presence. Many transitions that imply grief can become easier if we prepare for them and choose them, rather than allowing ourselves to become subject to them."

Parents, upon learning their child is and will forever be "dis"abled, are thrust into an immediate transition couched in a grieving that they can't acknowledge as grief. They experience the sudden loss of all those dreams they had for their child - dreams of baseball, soccer, ballet classes, figure skating, piano lessons etc. - all those pursuits that require a sound body. Now they imagine a future where challenges to the spirit and the will are the order of the day, not just for the adults who must guide the child, but also for the child who must live a life of struggle, to be watched by those who wanted nothing more for them than a carefree, fun-filled childhood.

A child, until he is able to verbalize intent and action, doesn't fully appreciate what "transition" means - he simply adapts to what surrounds him, or if that doesn't work, adapts what surrounds him to meet what he lacks in terms of accommodation. Such was the way of things for the child I once was, who grew up with, lives with and grows old with cerebral palsy.

I have been transitioning for some time. For the first 13 years, there was daily physiotherapy at the hands mostly of my mother until I terminated her contract to put me on my feet; to shuffling my way through grade school, high school and university. From there, to doing what everyone else does - working and paying my own way. Often my employment situations were self-created to accommodate my limited mobility and reduce physical stress. But more importantly, they were created to give me control when for years I had so little. While plotting my course to greater independence, financial and otherwise, I rediscovered a dormant gift - the gift of writing abandoned in childhood; God only knows why I left it behind.

Then another major transition took place in my 30s: I got married. For the next 20 years I got to experience the ups and downs of married life with a man who had to adjust his view of the world because of me - I taught him to appreciate the joy in solitude; in being still. I had the companionship of a man who claimed to hate breakfast until I introduced him to my French toast; a man who saw beyond the spastic legs to appreciate what those legs moving around the kitchen were really doing: the moving here to there to there was so that my hands could prepare onion soup and French bread. My husband was charged with carrying the soup; I was not and still am not able to carry soup in a bowl. I tried it once, and it most assuredly was not pretty!

I introduced my husband to fruit smoothies prepared with homemade yogurt, to Greek this and Italian that. Cooking and baking were talents developed not out of necessity but because they were therapeutic - I got fulfillment not only in the cooking process, but also in sharing those meals with family and friends. We enjoyed a common interest in books and music, and a love of old movies.

During our marriage, my husband, though older, didn't experience the same health issues as I did. He was, however, witness to disturbances in my mobility and balance, a couple of worrisome cardiac events, then the diagnosis of fibromyalgia, a connective tissue disease (genetics played a role as a brother and a sister have rheumatoid arthritis, with that same sister having lupus).

Still, I didn't sit down. I must have been crazy, so bent I was on proving I could do it. The pain etched on my face was testament to the fact that with each step it hurt to breathe. But I did it. I had to. More than once, my husband would practically scream at me to stop, to slow down, to sit down.

The headaches were more frequent; he massaged away the tension. The searing pain in my neck and back were sometimes unbearable and I would take to our bed for a few hours. Sometimes I took a nap, but I hated it - naps meant failure. Defeat. Resignation. I couldn't resign.

Through all of this I took no drugs. Drugs made me mentally dull. I couldn't walk, let alone write, if I was stupefied with pain medication. After much research and trial and error, I found a protocol of vitamin and mineral supplementing, along with alternative medicine, that worked well. I was back on track and feeling well, at least able to tolerate the subtle changes that were signals to decline. The goal was to stay afloat, whatever it took.

As my husband and I found ourselves reaching our 20th anniversary, neither of us thought that year might be our last together. Then he was diagnosed with a very rare cancer and taken to hospital within weeks of my birthday. There he would stay for almost five months, until he passed away.

I was alone with myself and our elderly dog, a 16-year-old Cairn terrier, who thankfully got to see his daddy one last time at the hospital. Nurses and a few doctors stood in the doorway of my husband's room to witness the reunion - all had tears. I have photographs of the scene, of dog and master. Within two months, the dog was gone, too. I suspect the dog's passing was hastened by his grief. For a while, I couldn't look at their photos without collapsing in a puddle of tears. Now I can look at them and smile.

A huge transition would define the next phase of my life. I was physically on my own, but I had myself, just as before. I would always have myself.

I've been on my own for almost four years now, and there have been many changes to my mobility. I know I'm getting clumsier, and I well and truly hate it. I must rest more and I feel like I'm sleeping my life away. I hate that, too! During those blocks of time when I'm energized, I bake and cook in bulk to ensure that I eat well every day; proper nutrition is critical.

I continue to watch, and invariably fall asleep through, all those British dramas my husband and I enjoyed. I expect I will always enjoy the mental aerobics online Scrabble provides - CRUMBLES crossing two triple word scores for 179 points was a great play. At my computer with the Scrabble board open, word processing program open, browser open with an array of newspapers at the click of a mouse - do I need a sound back and moving legs to continue to enjoy those things? No, I do not.

My message to parents raising their infant with the flailing limbs and the Raggedy Anne body is this: don't be disheartened. If your child never walks, never kicks a soccer ball, never executes a perfect plié, or never plays piano concertos at Carnegie Hall, don't forget there are other dreams, such as a son who grows up to be a lawyer and fights on behalf of those who have no fight left, or a daughter who studies medicine to research the many causes of the condition that challenged her own childhood.

Am I prepared for the next transition? Getting there slowly. Will I be happy about it? Probably not, but I'll press on, one stumbling step at time until I decide that I can step no more and sit myself down - but not out! Never out!


Carla offers more of her musings and observations on her website and she can be reached by email at terrier@xplornet.ca.
MORE ARTICLES
load more