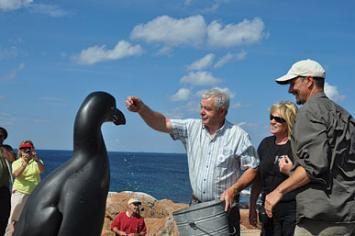 Todd McGrain's interest in birds began in childhood when he first saw the drawings of ornithologist John Audubon. His interest in extinct birds came later, after he read Hope is a Thing with Feathers, a book by Christopher Coknis that chronicles the plight of six extinct North American birds.

"When I became a sculptor," says McGrain, "I wanted to express a personal connection to these birds and memorialize them in a way that keeps them alive, if only in our imaginations." In 2000, he began "The Lost Bird Project." After much research on both sides of the Atlantic, he created a series of drawings and five cast bronze sculptures immortalizing the passenger pigeon, the Carolina parakeet, the Labrador duck, the heath hen and the great auk.

"These sculptures are subtle, beautiful, and hopeful reminders." says McGrain. "Their human scale (each statue is nearly two metres tall) elicits a physical sympathy. Their smooth surfaces beg to be touched and conjure the effects of memory and time. As a group they look melancholy and compel us to recognize the finality of our loss. They ask us not to forget them, and they remind us of our duty to prevent further extinctions."

McGrain has a special connection to the great auk, made even stronger by his 2010 visit to Newfoundland to place the statue on Joe Batt's Point on Fogo Island. Struck by the beauty of the landscape, the hospitality of the island's people and the stories of great auks having been seen off Fogo as late as 1888, he knew a great auk statue had to be located there. When placing the statue, McGrain turned it towards Funk Island just over the horizon from Fogo "as a reminder of what has been lost." Unlike the other birds in McGrain's project, great auk memorial statues are located in two other places: one in Iceland, which also had a large breeding colony, and one in Italy, where most of the remaining 81 mounted specimens and 75 eggs of the great auk left in the world are on display.