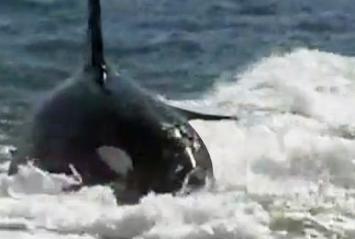 If you live near the sea, chances are, you've spotted a whale or two in your day. Perhaps you've sighted one from afar through your binoculars - or felt the spray on your face as one approaches your tour boat. But whatever your experience has been with whales, we're pretty confident you've never seen anything like what you're about to watch. The videos below are without a doubt the most amazing, shocking - and in some cases, frightening - examples of whale (and dolphin) footage we found by scouring YouTube. And a couple of them were shot right here in Newfoundland and Labrador!

Warning: Some of the videos contain foul language, as well as highly dangerous activities that we do not recommend.

Orcas Come Ashore in Search of Food
ABC news reports on this incredible phenomenon, with footage from National Geographic.

Whale Protects Calf From Boat
Never harass whales by chasing them - especially when they're with their young.

Breaching Whale Shocks Boaters
You might be a bit bored for the first part of this video - but what happens at 27 seconds will make it all worth it!

Dolphins Surround Boat in Conception Bay, NL
This footage, of about 100 white-beaked dolphins, was shot in February 2012 near Brigus, Newfoundland.

Dolphin Befriends Cat
Dolphins are known for their friendly nature. This one even likes to hang out with cats!

VERY Friendly Whale in Mexico
Watch as these boaters at San Ignacio Lagoon, Baja California, Mexico get up-close and personal with a grey whale.

Pilot Whale Drags Woman 40 Feet Underwater
This video depicts frightening footage from the early 1990s, when a pilot whale grabbed a woman by the leg and dragged her approximately 40 feet underwater before bringing her to the ocean's surface and setting her free. After the video was made public, the videographer was fined $10,000 for violating the Marine Mammal Protection Act.

Whale Puts on a "Thank-you" Show for Rescuer
You might need a tissue handy to watch this heartwarming video, shot in the Sea of Cortez. (By the way, did you know that Newfoundland and Labrador has its very own whale rescuer? Wayne Ledwell of Portugal Cove-St. Philip's runs the non-profit organization Whale Release and Strandings.)

Breaching Whale Lands on Yacht
Incredibly, the two people aboard the tiny boat were unharmed when a 40-ton whale breached and landed on top of the yacht. This incident occurred off the coast of South Africa in July 2010.

They're all awesome -- but my favourite was definitely the cat and the dolphin. Cutest thing ever!