How to Stage a "Swap" 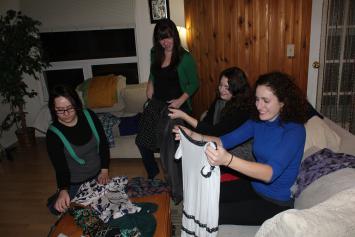 From left: Nicole Garbutt, Katherine Barton, Laura Wright and Elizabeth McMillan check out some clothes at a swap event in Yellowknife in December.
In today's consumption-driven society, more and more people are resorting back to bartering goods and services both in their communities and online as a way to lessen the amount of waste created and to heighten one's economical lifestyle. What's one way of achieving this? Instead of heading to the nearest retail outlet to breathe some new life into your closet, host a clothing swap with friends and acquaintances. Here's how:

• Invite your friends and ask your friends to invite their friends (about 10 to 15 people is the goal - aim for all shapes and sizes).

• If you are hosting the swap at your house, make sure you have at least two full-length mirrors available.

• To ensure everyone is comfortable, make sure there are other rooms available to dress and undress. If this isn't possible, remind people they can wear a body suit or bathing suit underneath their clothing if they wish.

• Clothes swaps can be seasonal, but they don't have to be. The best clothes swaps have all seasons clothing.

• If two people want the same item, you can have fun with this by either a coin toss, or having each person model the item of clothing and have a vote (do this only if you're sure there won't be hard feelings).

• If you have second thoughts about an item you have up for grabs - speak up quickly. A simple "Hmm, I'm not so sure I'm ready to give that up yet," should suffice, before someone else gets too attached to the item.

• Be prepared for a good time. It's surprising how much fun you'll have with a group of women trying on clothing!

Want to learn more about the movement towards swapping instead of shopping? See "The Return of the Barter System" in the February 2012 issue of Downhome.