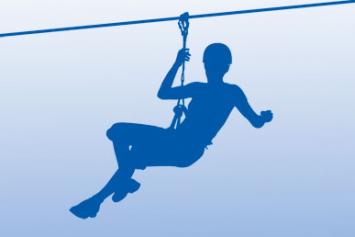 If you're an Atlantic Canadian, you don't have to book a trip to Disney to experience thrilling adventures. We have plenty of our own high-flying fun right here at home with a wide variety of ziplines to experience, located in some of the prettiest places the entire country has to offer. So, harness up and get ready for a wild ride!

Marble Zip Tours: Since 2008, those with a thirst for adventure have been flocking to Steady Brook on Newfoundland's west coast to view Steady Brook gorge and falls from on high. Eight zip lines provide the ride of a lifetime, plus you'll land at 10 platforms along the way - giving you ample time to drink in the gorgeous view. Check out Downhome's "zip-cam" video, shot shortly after Marble Zip Tours opened.

North Atlantic Ziplines: Starting this spring, North Atlantic Ziplines is introducing the high-flying activity of ziplining to Newfoundland's east coast in the scenic fishing community of Petty Harbour. The company estimates that once complete, the course will stretch across 3.2 km in total - with scenic vistas in all directions.

Zip Zag: Located in Grand Falls, New Brunswick, Zip Zag's zipline takes folks for a dramantic ride across the waterfalls and gorge of the Saint John River. Plus, their dual-racing zipline allows you and a friend to take the thrilling adventure together, at speeds of 30 to 40 km/h. Click here to watch videos of Zip Zag in action.

Over the Hill Zip-Line: Thrill seekers zip along a 1,000-foot zipline hovering about 40 feet above the Little Sou'West Miramichi River in Lyttleton, New Brunswick. After your first ride across, you'll hook onto an 800-foot cable and land at the river shore.

TreeGo: With locations in Mactaquac and Moncton, New Brunswick, TreeGo is much more than a standard zipline. The entire course takes adventure seekers through a series of exciting challenges - swinging on a Tarzan rope, keeping your balance as you cross log swings, and of course, a zipline adventure that cuts through a beautiful forested area. Click here to watch videos of all of TreeGo's adventures.

Saint John Adventures: Visit Fallsview Park to experience Saint John, New Brunswick's only zipline adventure. Thrillseekers zip over falls and rushing water on five ziplines before reaching the final landing on False Island. Bring a friend, because the last zipline is a dual one - a magnificent race to the end. Click here to watch footage of folks enjoying Saint John Adventures' zipline.