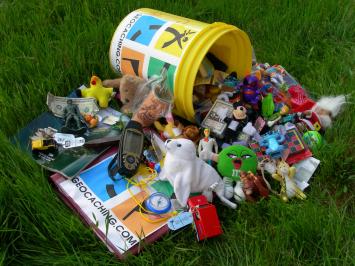 A collection of treasures collected from geocaches across the province.
By Dennis Flynn

Walking along the plateau atop Gros Morne Mountain in August 2011, I was contentedly drinking in the amazing view of dark, distant ponds cradled in the mountain valley, where silver rivers snaked their way towards inland fjords far below. Over lunch break, while still enthralled by nature's wonder in a place so removed from civilization and industrialization, I was invited to take part in, of all things up here, a high-tech treasure hunt using a friend's GPS (Global Positioning System).

Within 15 minutes we had found the hidden treasure, traded an item in the cache with something of our own, and soon headed back down the mountainside. We had conquered a mountain and found a hidden treasure - not bad for a casual summer day. While I'd like to say what we accomplished was extraordinary, it certainly was not. It's not even unusual.

There are thousands of these little "treasures" hidden in public places all over Newfoundland and Labrador, including almost all the major parks and developed trail systems. They are on the tops of mountains, under rocks on scenic beaches, hanging from branches in the woods, stowed away behind statues and monuments, tucked under boardwalks and stuffed inside bushes. The most historic lighthouses of the province have them nearby, as do many resettled communities. Some are in the heart of the cities near busy intersections, while others are on remote islands in the depths of the wilderness.

The vast majority of people passing by these sites don't even know something's hidden there. But there is a growing number of enthusiasts who make it their pastime mission to track and find these objects, and to place items of their own for others to seek out. It's all part of a worldwide technology-based treasure hunt called geocaching.

The sport has been around for a few years, since hand-held GPS devices became common tools (sometimes toys) for those who spend a lot of time on the water or in the wilderness. And the newest smartphones are equipped with GPS so that even those who might never have ventured far are now lured into trying it out.

The term geocaching describes the activity that combines geography (pinpointing places using longitude and latitude coordinates) and cache, which is the place where items are hidden. The basic premise is that organizations and individuals hide caches all over the planet and share the latitude and longitude coordinates (waypoints) on the Internet. Searchers program the waypoints into their GPS units or their smartphones, then attempt to find the caches and access the wide range of rewards stored in them (typically they are trinkets with no real monetary value).

Each geocache has a unique code name associated with it, and players can log their finds on the website www.geocaching.com. Basic accounts are free and do not expire so (aside from the purchase of a GPS or appropriate smart phone) there is no cost to try geocaching. Caches are ranked one to five, easiest to hardest, in degrees of difficulty to find and degrees of difficulty of terrain. While seasoned hikers and the more adventurous may appreciate the level five caches, many novices find that the easiest caches make a fun activity for families.

Geocaching has even spawned a new kind of travel called "techno tourism," whereby people actually plan vacations and trips around their geocaching activities. Last spring, there was a Canada-wide geocaching contest that enticed people to national sites. Geocaches containing a password could be found at select national parks, national historic sites and national wildlife areas throughout Canada, with chances for participants to win prizes.

Some groups in Newfoundland and Labrador, such as the Kittiwake Geocaching Network, have also planted caches to capitalize on this trend and bring new high-tech tourists to their area. This past summer, the Bay Roberts Cultural Foundation sponsored several "Geocache Weekends" (with prize draws for those completing a prescribed series of caches) along the town's beautiful Shoreline Heritage Walking Trail.

"With the widespread use of Global Positioning Systems (GPS) and all the hiking trails and beautiful shorelines in the province, geocaching is an excellent activity to promote tourism," says Margaret Ayad, organizer of the Bay Roberts event. "We found people really enjoy the search, and from the photos and comments they left, they bring family, friends, and even pets."

When you find a cache, the rules for what you do next are pretty straightforward:

2) You take something from the cache.

3) You put something else back in the cache to replace what you took. Most items found in caches are small, durable and of relatively low value, but make interesting conversation pieces or geocaching trophies. Obviously no food, drugs, alcohol, ammunition or anything that could damage the caches should be included.

4) Finally, log your find under your free account at www.geocaching.com.
One of the more interesting items to find in a geocache is a "Travel Bug" (also called a "Hitchhiker"), which is a small object that is carried from cache to cache by different geocachers. These objects (often labelled with a special tag or identification number) end up travelling around the world. The Travel Bug's adventures are also tracked online through www.geocaching.com.

As of press time, there were (according to Geocaching.com) more than 1,538,598 active geocaches and more than five million geocachers worldwide. More than 4,365 of those geocaches are in Newfoundland Labrador, with the number growing all the time.

Downhome has placed a geocache somewhere in the wilderness of Newfoundland and Labrador. Want to find it? Click here.