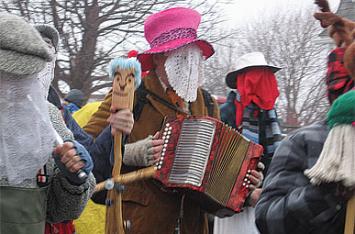 Now in its third year, the St. John's Mummers Festival is helping breathe new life into a beloved Newfoundland tradition. Want to join in the fun? See below for a list of events and activities planned for this year's festival.

Learn to make your own hobby horse, a traditional mummering accessory. (Click here for the story behind the hobby horse in Newfoundland.)

"How do you mummer anyway?": A public forum with mummers
(The Rooms theatre)

Join other mummers prior to the parade to find various and sundry clothing and other items to help you "get your mummer on!"

The parade starts at Bishop Field Elementary. Mummers weave through Gower Street, Bannerman Park, and the Georgestown neighbourhood and end at The Rooms.

Stroll through the city's streets until winding up at The Rooms, where mummers will enjoy music, syrup and snacks, and get their snap taken at the "Mummeries Forever" portrait studio.

For updated information, videos from past parades and more, visit www.mummersfestival.ca.