The Most Dangerous Occupation of WWII 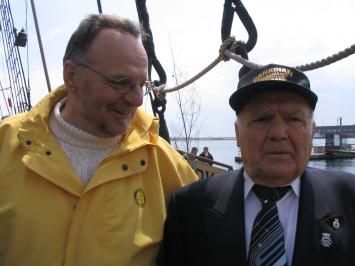 On September 3, 1939, the Second World War began. A mere 24 hours later, the British liner SS Athenia was sunk by a German submarine U-30 off Ireland, with the loss of 112 lives, including 19 crewmembers. This was the start of the longest battle of WWII, the Battle of the Atlantic, which didn't end until Germany surrendered in 1945.

At the age of 16, with the Battle of the Atlantic raging, my uncle Victor Froud, not knowing or caring about statistics, joined the merchant ship North Brook in Argentia, Newfoundland. His older brother Ned was chief cook on the North Brook at the time. Unlike regular Navy men, Merchant Navy men could sign up on any ship, going to any destination. Vic Froud signed up on many.

"We were wild and carefree when we were in port, and we had a reputation of being drunken sailors," Uncle Vic told me once. "We spent all our money because when we left port we all knew there was a good chance we'd never be in another port again."

If they were going to the bottom, the merchant seamen were determined not to take any fat wallets with them.

Torpedoed off South Africa
On July 8, 1945, Vic signed up on the 10,000-ton Point Pleasant Park in St. John, New Brunswick. He was headed for Cape Town and other African ports, with stops at New York and Trinidad along the way.

On the trip down to the Caribbean, the ship was part of an escorted convoy. But on February 11, the Point Pleasant Park left the convoy and travelled unescorted to the Cape of Good Hope, Africa, 3,400 miles away.

On February 23, when the ship was about 510 miles from South Africa, a torpedo struck the crew's quarters aft, on the starboard side, killing eight men and trapping others. Luckily for Vic his bunk was amidship; he was awakened by the explosion but uninjured. The chief officer and the third officer chopped away a wire mesh escape hatch to free the trapped men, one of whom had a broken back. But all the survivors were still in serious trouble.

The ship's screw (propeller) had been blown off and the stern stove in, and there was obviously a German U-boat lurking nearby. (It turned out that there were two U-boats, but no one knew that at the time.) The radio operator managed to make the "SSSS" U-boat alarm message on the transmitter, but heard no acknowledgement. The pumps worked for a while until incoming water killed the dynamo. The ship was doomed.

Twenty minutes after the torpedo struck, the captain gave the order "Abandon ship!" Uncle Vic scrambled to the nearest lifeboat. The ship's four lifeboats were lowered, but one immediately sank.

The Enemy Surfaces
The 43 survivors found themselves in the remaining three lifeboats beside their ship, stern down but still afloat. The airtight compartments would probably have kept her afloat for some time but for the next attack. Suddenly, about 200 feet away from the lifeboats, the water parted and U-532 surfaced. In a sweeping motion the sub fired 40 mm rounds into the ship at waterline to seal her fate. The gun swept around until it was almost aimed at the lifeboats. The survivors expected to be killed any minute.

"One man dove to the bottom of the lifeboat," said Uncle Vic. "It was a fearful moment, but I remember saying to him 'there's no point in trying to duck now.' The side of the lifeboat was no protection against 40mm bullets."

But no attempt was made by the sub to sink the lifeboats and it quickly slipped from sight. The lifeboats approached the Point Pleasant Park, but suddenly she heaved up on her bow and her main whistle started to blow as if issuing a warning to her crew to stay away. The flexing in the ship's hull had caused the lanyard on the whistle to tighten between the bridge and the funnel, causing the whistle to blow. The whistle blew until she slipped beneath the waves, one hour and five minutes after the torpedo struck.

More than 500 miles lay between the survivors and Cape Town, more than 300 miles to the South African coast. Fortunately, all three boats were equipped with sails and one had an engine.

There was very little food or drinking water aboard the lifeboats. Water was rationed to one ounce of water per man. There was pemmican on board, but it was so salty they feared it would make them too thirsty and wasn't eaten. Malted milk capsules and chocolate cubes were their only diet.

Even though they were in equatorial waters, it got very cold at night and the men huddled together to keep warm after sunset. "The pillow I laid my head on that first night was another man," Uncle Vic said. "He was the guy with the broken back. He died during the night and was cold in the morning. Without too much ceremony we committed his body to the deep."

His death brought the casualty count to nine. Forty-two of the ship's crew were still in need of rescue.

The lifeboats tried to keep together, but on the second night they drifted apart. For nine days Uncle Vic's lifeboat made its way toward Africa. On March 2, they reached Mercury Island, which was occupied temporarily by fishermen. One of the fishermen took the survivors to Luderitz Bay, the nearest place with a telephone. Within an hour the mine-sweeper-trawler Africana put to sea in search of the other two lifeboats. Those survivors were rescued the next day.

Royal Treatment by Residents
All the survivors were put up in a nice hotel in Luderitz Bay. The following day the merchants of the town took all of them to their stores where they let them pick out whatever clothing they wanted. Food, lodgings and drinks at the bar - all were paid for by the town merchants. Vic Froude (left) in South Africa, wearing the new clothes given to him by local merchants.

Several days later, the survivors were transported to Cape Town. More new clothing was given to the men there by the Flying Angels Organization. They were put up in a good motel with all food and drinks paid for. Two months later when they finally had a chance to sail for home, the men were reluctant to leave!

By that time the war was over and on the sea voyage home, 20-year-old Vic saw something he'd never seen on a ship before - lights on at night. During the war all ships sailed in blackout conditions at night.

German Sends Wreath
Twenty-five years after the sinking of the Point Pleasant Park, the survivors erected a memorial to their lost comrades in Halifax. A letter was written to Ottawa to find out more information about the sinking. Ottawa, in turn sent letters to Germany. A detailed letter was received from the captain of U-532, where it was learned that the fatal torpedo had not been fired by U-532, but by U-510. U-532 had fired the final rounds of machine gun fire into the doomed ship. The captain of U510, Alfred Eick, wrote to say that his sub had fired the torpedo. He also sent $30 for a wreath to be placed at the base of the monument.

Uncle Vic continued to daunt death. He became a high steel rigger and worked on many high-rise projects in the U.S. and Canada, including the CN Tower in Toronto, before he retired. He died in Scarborough, Ontario on September 20, 2010 at the age of 85. Ironworkers in the 1970s on the CN Tower in Toronto. Uncle Vic is in the red checked shirt, apart from others on the left of the photo.
MORE ARTICLES
load more