Hike and Seek for the Downhome Geocache 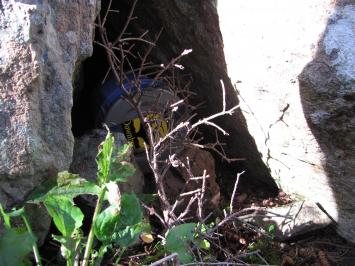 The Downhome geocache is waiting to be found!
How do you get techie geeks interested in long walks in the open air and outdoorsy types interested in computer science?

Introduce them to geocaching.

For those of you who don't know, geocaching is a high-tech treasure hunt that spans the globe. Geocachers all over the world hide simple "treasures" in the great outdoors, use a global positioning system (GPS) to mark the coordinates, then post those coordinates online so other geocachers can seek out their cache.

Usually, a cache is a container filled with small toys and other inexpensive trinkets. When a geocacher uncovers a cache, he or she usually takes an item and leaves an item of theirs behind in its place.

But it's not so much the trinkets that lure geocachers to locations near and far (some of which are obscure and difficult to navigate) - it's the journey that leads them there and the thrill of the find that keeps them on the hunt.

According to Geocaching.com, there are more than 2 million active geocaches in the world at present - thousands of which are located in Newfoundland and Labrador.

And Downhome isn't about to miss out on the action! Downhome has its own geocache hidden somewhere in the wilderness of this province. We've got a few trinkets tucked away for you in our cache - and we're excited to see what you might leave behind for us. We hope you'll enjoy the thrill of finding the Downhome geocache - and we promise the view from its hiding spot will leave you breathless.

So lace up your hiking boots, grab your GPS and head for the following coordinates: Drop a line or two in our logbook, and feel free to take an item and leave another behind in its place. Feel free to snap a photo of yourself with our cache using the disposable camera included in the container.