Meet You in Malawi 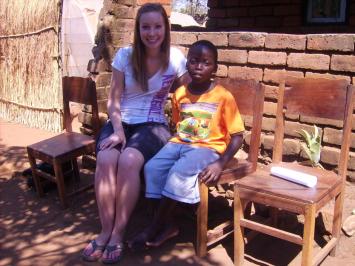 Sarah and her sponsored child, Bonface
By Linda Browne

Picture this: you're at home, relaxing comfortably on the couch when your favourite TV show is interrupted by a commercial. An innocent, wide-eyed child with a swollen belly stands atop a mud-caked road and gazes back at you, forlorn, as the sad statistics roll across the screen. When you feel you can't look any longer, a phone number appears, urging you to open your heart (and wallet) to help give the child a fighting chance.

Every year, thousands of us heed that call, sponsoring needy children through various humanitarian organizations, providing them with the basic necessities of life that we take for granted. Sometimes sponsors wonder if their money ever reaches the child whose photo graces their refrigerator or whose handwritten letter sits proudly on their desk.

Not Sarah Whalen. She discovered firsthand exactly where her money went.

It all started in 2008, when the Springdale, Newfoundland native travelled to Malawi (one of the world's most underdeveloped countries) in southeast Africa with a group of youth from the Pentecostal Assemblies of Newfoundland and Labrador. In addition to volunteering in local communities, the group also met children at the Village of Hope - a group of homes for orphans in the capital city of Lilongwe founded by Gander natives Junior and Ivy Andrews. While the trip was over in a couple of weeks, its impact on Sarah lasted much longer.

Since then, Sarah, 21, has been sponsoring Bonface, an eight-year-old boy from Malawi's Mpama region, through World Vision. With big, brown eyes and a bright, shy smile, Bonface has challenges that most other children on this side of the globe will never know. He has AIDS, an epidemic that's been ravaging his country for more than 25 years. Considering he has several siblings, his medication is just one more expense that his mother struggles to meet every month - a struggle that's become much easier thanks to Sarah's help.

"My parents have always sponsored children, so I was kind of exposed to it through that. It's $40 a month and I have it automatically taken out of my bank account. I don't even notice it's gone," she says.

This summer, after three years of exchanging letters and photographs in the mail, Sarah (now a third-year nursing student at Memorial University) decided to return to Malawi to meet Bonface in person and see her sponsorship money in action - but not before kicking her humanitarian efforts into high gear.

in Africa
On July 27, Sarah and her friend and fellow nursing student, Victoria Perry, departed for Kenya where they spent three weeks volunteering at a medical clinic in the town of Kajiado, outside the capital of Nairobi. The placement was organized by Fadhili Community, an organization that strives to help the less fortunate in Kenya and Sub-Saharan Africa. (They are pictured, left, with some of the staff of the AIC Kajiado Dispensary in Kenya.) Each day, Sarah and Victoria (who stayed with a local host family) walked an hour to and from work, where they helped with immunizations and lent a hand in whatever way they could. They also travelled farther inland to rural Africa where they took part in mobile clinics and healthy baby clinics, and got the opportunity to job shadow with local nurses.

"It's very interesting because they deal with a lot of medical stuff that we don't see here, like malaria, typhoid fever - that's like an everyday thing over there," Sarah says.

When their three weeks of volunteering in Kenya were through, Victoria flew home to Newfoundland and Sarah moved on to Malawi, where she encountered a few familiar faces.

"I got to see a lot of the kids I'd met (in 2008) and they're all so grown up. It was really cool, because a couple of them actually recognized who I was. It was very rewarding to see how well they're doing."

When World Vision staff finally arrived to take Sarah from her hotel to her sponsor child's village, she was excited but not sure what to expect. But once they got closer, the chorus of clapping that greeted her quelled any nervousness.

"When we first pulled up, all the women were dancing and singing. It was crazy. And, of course, they're so loud and they have such powerful voices," Sarah says.

Sarah is the first sponsor to visit Bonface's village since it was funded by World Vision three years ago, and the entire village made sure to come out to give her a proper welcome. When they reached Bonface's house, everyone gathered outside and a translator sat behind Sarah as the local children recited a poem and performed a song and traditional dance, all in Chichewa, the national language of Malawi.

"Then they wanted me to dance with them, and, of course, (I'm) not much of a dancer...so I got up and danced with them and they thought it was the funniest thing ever," Sarah laughs.

While Sarah says the whole experience was incredible, getting to spend time with the little boy whose face she's only ever seen in pictures sent across the continents tops it all.

"He was really shy. I'd ask him all sorts of questions about school and about Malawi and what was his favourite animal, and he was just so quiet. He wanted to sit next to me and if I'd walk over there, he'd walk over there with me...and he wanted to give me a hug. I guess it was just overwhelming in a sense," she says.

Even though they only spent several hours together, Sarah says the smiles and stories she and Bonface shared will stay with her for the rest of her life.

"It was amazing to see him in real life and (see) this is where my money is going. And he's doing so well...he's such a healthy little boy and just so excited."

Before Sarah left, Bonface's grandmother presented her with a big bucket of peanuts (which the family grows in the village to sell for extra money) - a gift that humbled Sarah.

"I said to the translator, 'Oh, so do I just take a couple?' And he said, "No no no, the bucket, the whole thing is for you.' So then of course I had this big bag of peanuts...it was just nice to see something that they work for and they have, they wanted to give it to me."

Ultimately, Sarah hopes her nursing work will take her to even more foreign countries and give her the opportunity to lend a helping hand to those who need it most. And if she can make a difference in just one person's life, it'll be worth all the effort.

"I've had people say to me before, 'I don't know why you do trips like that, you can't change the world.' I'm not out to change the world. I'm out to impact someone's life and make their life a little easier," she says.