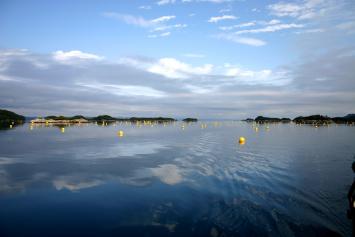 Did you know that First Nations people in Nova Scotia have been practicing aquaculture for more than 5,000 years? There is evidence that the Mi'kmaq were farming quahogs thousands of years ago in the Saint Mary's Bay region. Read on for nine more fast facts about aquaculture we bet you didn't know.

•According to the United Nations Food and Agriculture Organization, without aquaculture the world will face a seafood shortage of 50-80 million tonnes by 2030.

•Aquaculture is one of the lowest carbon-producing forms of food production on the planet.

•Half of the world's consumed seafood comes from aquaculture.

•Aquaculture produces fresh seafood on a year-round basis and also helps provide year-round employment for people who work in the traditional seasonal fishery.

•The addition of hormones to Canadian farmed seafood is prohibited by the Canadian Food Inspection Agency.

•Pesticides are only used in fish farming when absolutely necessary, and must be prescribed by a veterinarian. Pests on aquaculture sites can also be removed manually or by fallowing of net pen sites.

•Often aquaculture farms are placed in sites with high levels of tidal flushing to mitigate against the build-up of waste.

•All the Atlantic salmon eaten by Nova Scotian consumers is farmed product. Wild Atlantic salmon has not even been available as a commercial product for at least two decades.

•As an alternative to fishmeal, the aquaculture industry is increasingly using vegetable proteins and oils. Over the last five years, the amount of wild fish used in feed has been reduced by 40 per cent.

For more about aquaculture, see "Farming For the Future" in the October 2011 issue of Downhome.