So You Wanna Build a Root Cellar? 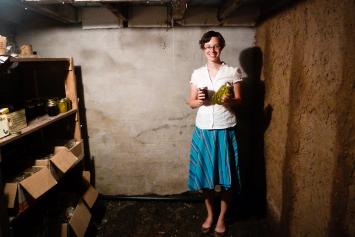 Marla MacLeod, food connections project coordinator with the Ecology Action Centre's (EAC) Food Action Committee tests out the root cellar in the basement of the EAC in Halifax, Nova Scotia.
While there are many different types of root cellars (from above ground cellars to hillside cellars, hatch cellars and more), if you live in an urban area, or don't have a lot of land to work with, building an outdoor root cellar may not be an option. But if you have a cool space in your basement, and a bit of determination, you too can have a rocking root cellar.

• Since root crops are meant to be in the ground in a dark, cool and moist place, build your root cellar in the dampest corner of your basement. Try to place it next to an exterior, underground wall. You may want to consider purchasing a hygrometer to measure humidity.

• Ventilation is important as it keeps produce from spoiling and moves out ethylene gas (which is given off by fruit and veggies as they ripen). Place two pipes through the outside wall - one at the highest point of the room - about three inches in diameter. If possible, pick an area with a casement window to make this easier. Use pipe, PVC or ducting to create the vents. Cut a length of the plastic pipe to reach through the wall and cut the end straight. Slide a closed blast gate (valve) onto the pipe and use screws to secure. Do the same for the other vent. Use insulating foam to seal the wall around the pipe and fill in any gaps.

• Use rot-resistant wood for framing and moisture-resistant wall board. Nail a 2-by-4 to the ceiling, fasten another to the concrete floor with construction adhesive and cut studs to fit between them.

• Next, cover the walls. Put gypsum board on the inside surfaces first and once the inside panels are screwed in place, fill the gaps with fibreglass insulation and cover the outsides. Use aerosol foam to fill the gaps between the new wall and the edges of the old walls.

• Add shelves, keeping in mind the kinds of fruit and vegetables that will be stored on them. Lower shelves will be cooler and wetter, while higher ones will be warmer and dryer.

• If you don't already have a door in place, make one from quarter-inch plywood and hang it directly on the studs.

• Fasten a rod to the handle of each blast gate and run it through the wall into the basement, which lets you open and close the valves without opening the door and spilling the cold air.